The Hanoitimes - So far, there have not been any Covid-19 infections in Thai Nguyen province, where large scale industrial parks are located.

As the outbreak of Covid-19 is having a negative impact on the Vietnamese economy, Minister of Labor, War invalids and Social Affairs Dao Ngoc Dung expects strong measures against the deadly virus would prevent infections at industrial parks.

Dung made the statement during his visit to a number of foreign-invested enterprises in Thai Nguyen province on February 13.

General Director of Samsung Vietnam Choi Joo Ho said the company, with 130,000 employees nationwide, has not reported any case of infection so far.

At Samsung Electronics Vietnam Thai Nguyen, which employs 54,000 workers, the company has set up 28 thermal cameras to check the body temperature of people passing by, Choi added.

Additionally, all 54,000 workers have their body temperature checked by Samsung’s own modern devices. The company also delivers leaflets and detailed instructions to each worker to prevent the infection.

“As the Vietnamese government is stepping up efforts against the outbreak, Samsung is determined to prevent Covid-19 from infiltrating its manufacturing facilities,” Choi stressed.

At South Korean-invested Alutec Vina, a company representative said they employ 1,650 workers, including 27 South Koreans. As of present, the company requires all workers and staff to wear face masks and undergo body temperature check.

Tran Quoc To, secretary of the Thai Nguyen Party Committee, said the province has 19 enterprises with hundreds of Chinese staff and workers. As a gateway province to Hanoi, Thai Nguyen has been allocating substantial financial amounts to purchase medical equipment and medicine to prevent possible spread of the outbreak. 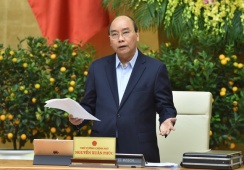