The Hanoitimes - The Trump administration is speeding up shifting of global supply chains from China.

Vietnam has been considered a preferred partner of the US at a time when the world's largest economy intensifies its cooperative projects, the US International Development Finance Corporation (DFC) has affirmed.

The US has put Vietnam in its list of priority for the regional projects in the future with a focus on strategic products in the supply chains of US companies, DFC’s CEO Adam Boehler told Vietnamese Ambassador to the US Ha Kim Ngoc.

DFC plans to support development projects in the Mekong Sub-region and investment projects, mainly in energy, infrastructure, and digital economy, in developing countries, Adam Boehler said at a meeting with the Vietnamese ambassador in Washington on June 2.

US shifting supply chains from China

The US is pushing to create an alliance of “trusted partners” dubbed the “Economic Prosperity Network,” Reuters cited an American official. It would include companies and civil society groups operating under the same set of standards on everything from digital business, energy and infrastructure to research, trade, education and commerce, he said.

Foreign media has reported that the Trump administration is “turbocharging” an initiative to remove global industrial supply chains from China as it weighs new tariffs to punish Beijing for its handling of the coronavirus outbreak.

“We’ve been working on (reducing the reliance of our supply chains in China) over the last few years but we are now turbo-charging that initiative,” Keith Krach, undersecretary for Economic Growth, Energy and the Environment at the State Department told Reuters.

“I think it is essential to understand where the critical areas are and where critical bottlenecks exist,” Krach said, adding that the matter was key to US security and one the government could announce new action on soon.

Global companies have been testing Vietnam’s capabilities for several years – even before the added impetus from the US-China trade war.

This is because China’s rise as the world’s factory has created labor shortages and drove up costs.

As global supply chains for halal products have been disrupted by the pandemic, Vietnamese companies have been urged to further tap the halal market which has an export value of US$34 billion a year, experts said at an online seminar on April 28th in Vietnam as reported by Vietnam News Agency.

The country’s young and comparatively cheap labor force, stable government, and business-friendly environment have turned the Southeast Asian nation into an appealing alternative to China.

The government of Vietnam, at a meeting chaired by Prime Minister Nguyen Xuan Phuc in mid-May, affirmed to facilitate foreign investment by maintaining a safe and favorable investment environment.

Both local and foreign media reported that since March, Apple has relocated its facilities from China to Vietnam for the debut of about four million AirPods in the second quarter.

Google and Microsoft are shifting part of their chains from China to Vietnam. Meanwhile, Amazon and Home Depot has started recruiting and seeking supply chains in Vietnam. What’s next for supply chains scrambled by the pandemic? 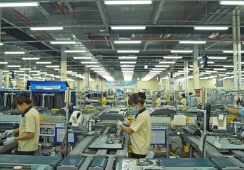