The Hanoitimes - The trial ended shorter than scheduled 10 days and was less tense than expected.

The People’s Court of Hanoi on Monday [September 14] handed over capital punishment to two defendants for their involvement in the death of three policemen at land-related Dong Tam case.

Le Dinh Cong, 56, and Le Dinh Chuc, 40, were sentenced to death after they were found guilty of murder.

The pair was convicted of being masterminds behind an organized protest and attacks that caused a clash between villagers and the police on January 9, 2020 over the construction of a military premise in Dong Tam commune in Hanoi’s outlying district of My Duc.

The court issued a life imprisonment to Le Dinh Doanh, a 32-year-old son of Le Dinh Cong, for the same charge.

Three others also received jail sentences ranging from 12 to 16 years for the charge of murder.

The remaining 23 defendants who were charged with resisting state authority will spend from 15 months to 72 months behind bars.

The trial began on September 7 and ended shorter than scheduled 10 days.

“The defendants’ activities were well-organized with tasks assigned to each person, showing aggressive thugs, contempt, and defiance of the law. Murdering many people in a very brutal way, the defendants’ behaviors also affected the correct operations of state agencies, causing disorder in Hanoi and confusion to people,” the Ministry of Public Security’s mouthpiece Cong An Nhan Dan quoted the prosecutors.

The Dong Tam case is prominent for the years-long land disputes between villagers and local authorities and for audacious activities against the police by preparing handmade weapons to “kill as many policemen as possible” in 2020 and capturing dozens of policemen in a clash in 2017.

In Vietnam, land is under the state control, people are given rights to use it only. 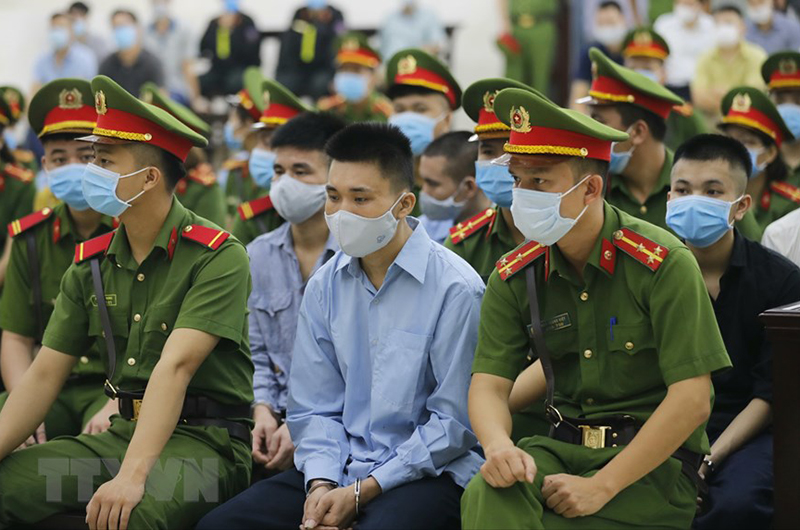 Life gets back to normal in Dong Tam after deadly clash