The Hanoitimes - Test-takers from localities not constrained by social distancing orders would take the exams on August 8-10 as planned, while those who are quarantined or living in areas under lockdown can take them later.

Prime Minister Nguyen Xuan Phuc has agreed with the education ministry's proposal to proceed with the national high school exams as planned despite the reappearance of Covid-19 in a dozen of provinces and cities.

Provincial authorities and health officials must ensure safety for test candidates, Kinh Te & Do Thi quoted the PM as saying at a regular government meeting on August 3.

As scheduled, the examination will be organized from August 8-10 nationwide, two months later than usual because of the Covid-19 pandemic.

The exams are aimed to determine whether students are eligible for graduating high school and the results could also be used to apply for certain universities and colleges.

PM Phuc said this is a matter of public concern and asked the Ministry of Education and Training (MoET) to strictly comply with the Education Law.

The MoET, the Ministry of Health and concerned ministries must ensure safety for test-takers, parents and teachers during the exams, the PM stressed.

He added that MoET, the Party's Central Commission for Communication and Education, the Ministry of Information and Communications must coordinate closely in communication work to convince people about the safety in the midst of the complicated evolution of the pandemic.

For his part, Minister of Education and Training Phung Xuan Nha said his ministry had held a meeting with the exam steering committees in localities for final review. Most provinces and cities have prepared classrooms and teachers for the exam to be conducted safely.

He added that the ministry would guide relevant agencies in provinces and cities to classify test-takers based on the risk levels of transmission and arrange suitable venues and classrooms.

Under the MoET's new decision, test-takers from localities not constrained by social distancing orders would take the exams on August 8-10 as planned, while those who are quarantined or living in areas under lockdown can take them later.

Notably, candidates who are infected with the novel coronavirus will be exempted from taking the exam and graduated automatically. 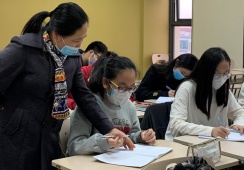 Vietnam to hold national exam as Covid-19 is contained