The Hanoitimes - From May 15 to 22, the police sanctioned a total of 101,469 drivers, according to the latest report from the Ministry of Public Security.

In the first week of a month-long operation to crack down on traffic offenses, Vietnamese police have fined around 100,000 drivers for diverse violations with up to VND75.5 billion (US$3.25 million), local media reported.

Starting May 15, thousands of traffic police officers have been dispatched nationwide in an overall crackdown launched after a surge in traffic violations in the post social-distancing period including drunk driving, resisting arrest and illegal racing.

From May 15 to 22, the police sanctioned a total of 101,469 drivers, according to the latest report from the Traffic Police Department under the Ministry of Public Security. More than 15,880 vehicles were seized while some 6,440 drivers had their licenses revoked.

On average, the officers found nearly 800 drivers driving under the influence per day during the first week of the campaign, the report said.

The crackdown had an immediate impact on road safety and traffic accidents. During the first week of the crackdown, only 185 road accidents were recorded, down 34% from a week earlier which claimed only 74 lives, down 52%.

Drivers’ awareness has improved. Most people are aware of the traffic police's random inspection and actively comply with the law on traffic order and safety," Colonel Nguyen Quang Nhat, head of Propaganda and Investigation Division under the Traffic Police Department, told Kinh te & Do thi.

He added that in the coming days, the traffic police force throughout the country will strictly control the vehicles and focus on handling the high-risk violations which lead to traffic accidents such as exceeding permissible alcohol content, using drugs, speeding speed, lane encroachment, driving bike without helmet, among others.

"The traffic police's random inspection must comply with the working process, ensure safety and makes no obstruction to traffic flow," Nhat stressed.

During the campaign, traffic police officers are allowed to check papers of any body and stop drivers showing sign of driving under the influence. Even those who show no sign of violation would also be pulled over for random check.

During the first week of the campaign, a total of 450,000 vehicles were stopped for random check and less than a quarter of them were fined.

Road accident is a leading cause of death in Vietnam, killing almost one person every hour. In the first three months of 2020, the country recorded more than 3,400 traffic accidents in which more than 1,600 people were killed and 2,500 others injured. 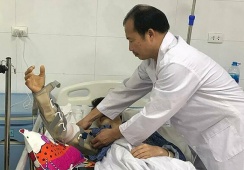 Accidents have decreased in six months