The Hanoitimes - The event will set targets for the development of the Army after 2030.

The 11th Party Congress for the 2020-2025 tenure of the Vietnam People’s Army opened today [September 28] with the presence of Secretary General of the Communist Party of Vietnam and State President Nguyen Phu Trong.

Mr. Trong is also Secretary of the Central Military Commission.

The event marks the participation of 450 delegates who represent more than 26,000 party members in the army.

Participants review the five-year implementation of the resolution issued in the previous congress, while sketching out orientations, goals and tasks to conduct defense-military tasks and Party building in the next five years.

Speaking at the event, Gen. Ngo Xuan Lich, Defense Minister, said the congress will set targets for the development of the Army by 2030 which is set to become modern and powerful with the strong self-defense and militia forces. 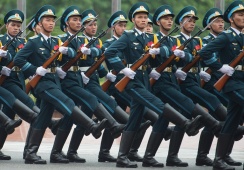