The Hanoitimes - Vietnam and Russia have stepped up its oil and gas cooperation in a latest move amid China’s growing expansionism in the South China Sea.

He said he will ask the Ministry of Industry and Trade to consider some preferential mechanisms for Russian companies, mostly oil and gas ones, to facilitate their operations in Vietnam, Phuc said at a meeting with General Director of Zarubezhneft JSC Sergey Ivanovich Kudryashov.

The PM affirmed that the government of Vietnam will create optimal conditions for projects run by Zarubezhneft and Vietnam Oil and Gas Group (PetroVietnam).

Zarubezhneft and PetroVietnam are running two petroleum joint ventures which are Vietsovpetro in Vietnam and Rusvietpetro in Russia.

At the meeting, Sergey Ivanovich Kudryashov informed the PM about good performance of the two joint ventures.

Established in 1981, JV Vietsovpetro obtained its first oil flow in 1986. The discovery of a highly productive oil deposit in the granites of the crystalline basement of the Bach Ho field was a major success of the Russian petroleum experts.

Meanwhile, Rusvietpetro was established in 2008 in accordance with the Joint Declaration signed by the Presidents of Russia and Vietnam in 2006. The company handles the development of 4 blocks of the Central Khoreyver Uplift in the Nenets Autonomous District which includes 13 fields.

In 2019, the participants signed a number of documents showing joint efforts in new projects both in Vietnam and Russia. This year, Zarubezhneft also entered the consortium with Novatek, Total, and Siemens for the implementation of an LNG project in Vietnam.

For years, energy is one of key pillars in the Vietnam – Russia ties and once again affirmed by top government leaders Nguyen Xuan Phuc of Vietnam and Dmitry Medvedev of Russia.

In Phuc’s visit to Russia in May 2019, they affirmed energy remains one of the key pillars in the bilateral relations, saying that the two sides would support both Vietnamese and Russian firms in the exploration and operations of oil and gas in Vietnam’s continental shelf and in Russia’s.

Companies at the center of attention include Gazprom, Novatek, Rosneft, among others. 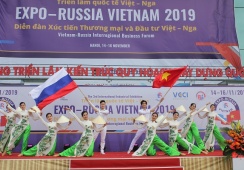 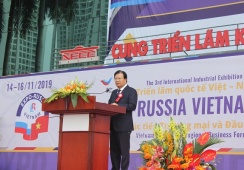