The Hanoitimes - Countries that are slow in implementing anti-virus measures, such as Japan and South Korea, have been hit much harder.

As Covid-19 is wreaking havoc around the world, proactive responses implemented by Vietnam and Taiwan have proven to be key in the fight against the deadly virus, according to an article published on Project Syndicate.

Beyond the escalating global health emergency, which has already killed thousands, the pandemic has disrupted normal trade and travel, forced many school to close, roiled the international financial system, and sunk global stock markets. With oil prices plunging, a global recession appears imminent.

According to the article, authored by Brahma Chellaney, Professor of Strategic Studies at the New Delhi-based Center for Policy Research, none of this would have happened had countries responded quickly to evidence of the deadly new virus by warning the public and implementing containment measures. “Indeed, Taiwan and Vietnam have shown the difference a proactive response can make,” the author said.

Taiwan, learning from its experience with severe acute respiratory syndrome (SARS), instituted preventive measures, including flight inspections, even before China announced the outbreak. Likewise, Vietnam quickly halted flights from China and closed all schools. Both responses recognized the need for transparency, including updates on the number and location of infections and public advisories on how to guard against Covid-19.

Thanks to their respective policies, both Taiwan and Vietnam – which normally receive huge numbers of travelers from China daily – have been keeping the epidemic under control and cases of infections at minimum. Meanwhile, “neighbors that were slower to implement similar measures, such as Japan and South Korea, have been hit much harder,” stated Project Syndicate.

At a meeting with Prime Minister Nguyen Xuan Phuc on March 14, Chief Representative of the World Health Organization (WHO) in Vietnam Kidong Park said he was impressed with Vietnam’s efforts to prevent the spread of the epidemic, including the government’s drastic measures, sufficient resources allocated for preventive activities, and active participation from the public.

Right before the outbreak, Vietnam had invested significantly in prevention and stayed active throughout the epidemic, said Park.

Park added all of these are thanks to the high confidence and trust of the people in the government, referring to the successful isolation of a commune in the northern province of Vinh Phuc without any disruption to the daily life of local people.

At the meeting, PM Phuc said trust is essential for combating any epidemics. After having 16 cases of infection recovered from Covid-19, Vietnam is determined to contain the epidemic.

More importantly, Vietnam remains transparent about the epidemic and there is nothing to hide away from the public and the world community, Phuc stressed, adding the country aims to realize the dual target of both containing the epidemic and maintaining high economic growth. 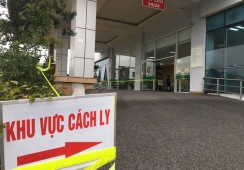