The Hanoitimes - General To Lam, Vietnamese minister of Public Security, said the Vietnamese authorities are cooperating with Japanese parties to clarify the issue.

Vietnam has initiated a police investigation into the head of the Customs Department and deputy head of the Taxation Department in the northern province of Bac Ninh, who have been suspended from duty, and other state officials for allegedly taking bribes from Tenma Vietnam, a local unit of a Tokyo-based company Tenma.

Notable name in the list of suspended officials is Tran Thanh To, head of Bac Ninh province's Customs Department, who approved the decision to inspect Tenma Vietnam at the time the alleged bribery took place.

Pham Dinh Thuong, former deputy head of Taxation Department in the province, has also been suspended for signing the decision of setting up a tax inspection team at Tenma Vietnam.

On the sidelines of a National Assembly meeting on May 26, General To Lam, minister of Public Security, said the Vietnamese authorities are cooperating with Japanese parties regarding the issue.

As the information was originated from Japan, an international cooperation in this situation is necessary, Lam told local media.

Minister of Finance Dinh Tien Dung on Monday ordered his ministry to set up an inspection team to investigate the allegation.

Dung said the issue is serious and directly affects Vietnam’s business environment at a time government agencies are determined to step up the fight against corruption. 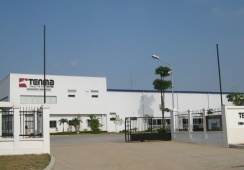