The Hanoitimes - For this year, 24 out of 63 provinces/cities have fully disclosed information on their respective budgets, scoring 75 points and more, while in 2018, only six provinces did so.

Vietnam’s provinces and cities have shown greater efforts in improving budget transparency, which was reflected by an average score of 65.55 out of 100 in the 2019 Provincial Open Budget Index (POBI), significantly higher than 51 points recorded in last year’s edition.

For this year, 24 out of 63 provinces/cities have fully disclosed information on their respective budgets, scoring 75 points and more, while in 2018, only six did so, said economist Vu Sy Cuong at the launching workshop of 2019 POBI on July 8.

The report was jointly launched by two members of the Budget Transparency, Accountability and Participation (BTAP) Alliance, namely the VEPR and the Center for Development and Integration (CDI). It was first made public in 2017 to assess the transparency level in the management of provincial budget nationwide and their compliance with transparency requirements stipulated by the Law on State Budget.

“POBI would help build trust among citizens and Vietnam’s partners for development in budget management in provinces,” Cuong added, saying the index is considered an useful tool to assess the efficient use of state finances.

The assessment of POBI is divided into three categories. 24 provinces were included in category A, being assessed with “full disclosure” and having scores in a range of 75 – 100. Category B or “moderate disclosure” includes 27 provinces with scores ranging from 50 to 75. Meanwhile, nine provinces are classified in category C or “insufficient disclosure”, scoring 25 – 50, and three in category D with “low disclosure”, or scoring less than 25 points.

“It is worth mentioning that a large proportion of provinces/cities in category C and D is dependent on financial support from the central government and could not make contribution to the state budget,” Cuong added.

According to the report, two main pillars of the POBI are the transparency of the provincial budget and the participation of the people in drafting up the budget estimate.

Notably, Hanoi has moved up to the “full disclosure” category with score of 79.59, much higher than just 49.72 last year, while Ho Chi Minh City also showed improvements with 66.03, or moderate disclosure, higher than the score of 48.98 last year.

Dau Anh Tuan, head of the Legal Department under the Vietnam Chamber of Commerce and Industry (VCCI), said the result showed many provinces/cities have not fully complied with the Law on State Budget.

For businesses and investors, transparency would help them reduce costs and risks, while a predictable and clear legal environment would encourage them to commit to long-term business and investment, Tuan added. 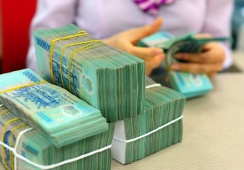