Hanoi puts village of 11,000 people on lockdown over coronavirus

The Hanoitimes - Deputy Prime Minister Vu Duc Dam has said that locking down an area when necessary is the best way to timely prevent the spread of the virus.

The Hanoi city government has decided to put a village of 11,000 people on lockdown as local authorities are increasingly determined to contain the spread of the coronavirus amid skyrocketing cases in the world.

Ha Loi, located in Hanoi’s outlying district of Me Linh, will be closed to outsiders and its local residents are required to stay at home for two weeks after a 47-year-old man, identified as Patient No.243, was confirmed to be positive with the virus on April 7.

He accompanied his wife for a checkup at Bach Mai hospital in Hanoi on March 12. The hospital has become the biggest outbreak epicenter in Vietnam, with more than 40 Covid-19 patients linked to it.

In addition, two others who were in close contact with him have been infected with the virus.

So far, more than 100 people who had close contact with the patient (F1) and more than 200 F2 people (those who came into contact with F1) have been identified. Among them, there are 63 medical workers at Hanoi Obstetric and Gynecology Hospital who have tested negative for the virus.

Following the case, Chairman Nguyen Duc Chung of the Hanoi People’s Committee asked local authorities to conduct testing for all F1 and F2 of Patient No.243.

In February, Vietnam put a village of 10,600 people Son Loi commune in the northern province of Vinh Phuc for 21 days after several people of the village tested positive for th virus.

Deputy Prime Minister Vu Duc Dam said locking down a commune like Son Loi is an absolutely right decision that prevents the spread of the virus in the community.

As of April 8, Vietnam has confirmed 251 coronavirus-infected cases, including 122 convalescents. 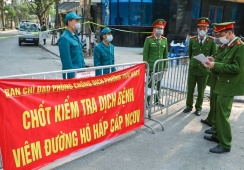 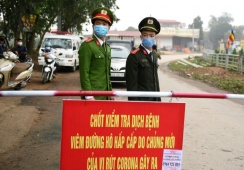 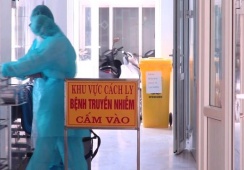