Vietnam said it has full legal foundation and historical evidence to back its sovereignty claims over Spratlys.

Vietnam said it keeps a close watch on the developments in the South China Sea (called East Sea by Vietnam) following the news on the presence of nearly 300 Chinese ships in Spratly Islands.

“Vietnamese authorities closely monitor developments in the East Sea and protect and exercise the sovereignty and jurisdiction over Vietnam’s seas in accordance with international law and the United Nations Convention on the Law of the Sea (UNCLOS) 1982,” Spokesperson Le Thi Thu Hang of Vietnam’s Ministry of Foreign Affairs said at a press conference on May 13.

On May 12, the National Task Force for the West Philippine Sea (NTF-WPS) said a total of 287 Chinese militia ships scattered across Whitsun Reef (called Da Ba Dau in Vietnamese and Julian Felipe Reef in Philippine).

Da Ba Dau is a low-tide feature (above water only at low tide) of Union Banks, a large atoll in Vietnam's Spratly Islands (Quan Dao Truong Sa in Vietnamese).

Hang said that Vietnam has full legal foundation and historical evidence to back its sovereignty claims over Truong Sa.

“Being a littoral country and a member of UNCLOS, Vietnam has rights to sovereignty and jurisdiction defined in UNCLOS,” she stated.

Though China claims that the hundreds of vessels were simply seeking shelter from storms, the Philippines’s task force noted that “despite clear weather at the time, the Chinese vessels massed at the reef showed no actual fishing activities and had their full white lights turned on during night time,” according to Sam Cohen, J.D. student at Harvard Law School, and Alex Vivona, student at Harvard Law School.

In an interview with The Diplomat, Poling compared the recent activities at Whitsun Reef to the situation in December 2018, when China deployed its maritime militia to occupy the waters around Thitu Island (Dao Thi Tu in Vietnamese). Since then, China has had a permanent maritime militia presence around Thitu Reef, though the Philippines still notionally controls Thitu Island. Poling suggests that China will take a similar approach in Union Banks, which is what is evident now at Whitsun Reef. 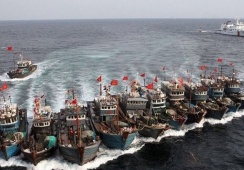 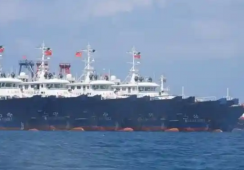