Except for emergencies such as natural disasters or fire accidents, addressing business concerns should be at a top priority list of government leaders, said Prime Minister Nguyen Xuan Phuc.

The Vietnamese government remains firm on reaching the target of having one million enterprises by the end of 2020 as the number of business formations in 2019 hit an all-time high.

Average registered capital per newly-established enterprise reached VND12.5 billion (US$540,889) during this period compared to the past few years, up 11.2% year-on-year, indicating better health of local companies entering the market.

If VND2,273 trillion (US$98.35 billion) of additionally capital pumped by operational enterprises is included, total registered capital added to the economy in the whole year was VND4,003.2 trillion (US$173.22 billion).

Besides, 39,400 enterprises resumed operation, a rise of 15.9% against last year, bringing the total number of newly-registered and revived enterprises in 2019 to nearly 177,500.

Total number of laborers of newly-created enterprises in 2019 was 1,730,200, an increase of 13.3% against a year earlier, according to the government-run General Statistics Office (GSO).

Supporting enterprises development continues to be one of the top priorities of the government in 2020.

In the government’s Resolution No.01 issued in early 2020, the government stressed the necessity to create favorable conditions for household businesses to register as enterprises, while requesting ministries and government agencies to have specific measures to realize the one million enterprises target by the end of 2020.

Under the resolution, the government expected more initiatives to increase Vietnam’s ranking in business environment by 10 places, targeting a strong growth of the business community both in quantity and quality.

Moreover, enterprises are encouraged to restructure towards greater sustainability and innovation.

The government also welcomes private enterprises to participate in public investment projects, including major ones.

Notably, the resolution stated the government would set up a task force specialized in removing overlapping and obsolete regulations, eventually releasing all resources to spur socio-economic growth.

At a business summit in late 2019, Prime Minister Nguyen Xuan Phuc said enterprises are the most important driving force for economic growth in modern era.

Phuc said they are the main contributor of added value for the economy, and equipped with the strongest motivation for competition and innovation.

Phuc reiterated his message that except for natural disasters or fire accidents, addressing business concerns should be at the top of priority list of government leaders.

Phuc requested government agencies to be more open and adopt a new mindset in supporting enterprises and allowing them to participate in most fields, except in sensitive aspects of national security or macro-management.

Regarding the one million enterprises target, Chairman of Vietnam Chamber of Commerce and Industry (VCCI) Vu Tien Loc said in an interview with Vietnam News Agency published on December 31, 2019, as of present, Vietnam has nearly 800,000 enterprises.

Therefore, it is important to encourage household businesses to formalize themselves as registered enterprises voluntarily, adding they are in nature a business unit already. 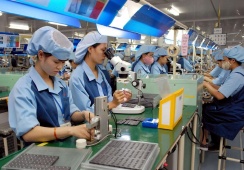 Sustainability could be competitive advantage for Vietnamese enterprises Vietnamese enterprises urged to prepare for changes in tax policy