The Hanoitimes - Prime Minister Nguyen Xuan Phuc requires cities and provinces to strengthen inspection, detection and handling of illegal entries within their jurisdiction.

Vietnam has suspended all inbound flights from countries and territories infected with a new variant of SARS-CoV-2. Flights between Vietnam and the UK and South Africa are the first to be affected, according to the Prime Minister’s latest directive.

Prime Minister Nguyen Xuan Phuc on January 5 signed a directive on strengthening the prevention and control against the pandemic, in accordance with the Ministry of Health’s proposal to stop operating and restrict licensing flights to Vietnam from countries and territories infected with the new variant of the virus.

The prime minister assigned the Ministry of Foreign Affairs to work closely with the Ministries of Health and Transport to make a list of countries and territories where the directive is applicable.

If any case infected with the new virus variant is detected, the Ministries of Health, Public Security, and National Defence, and local agencies will be requested to quickly track down and immediately apply necessary measures to prevent the virus from spreading to the community.

The prime minister also required cities and provinces to strengthen inspection, detection and handling of illegal entries in their jurisdiction. He asked the Vietnamese people to strictly abide by Covid-19 prevention measures, including wearing face masks, avoiding large gatherings, and limiting the organization of festivals.

Pandemic prevention measures have been tightened after the new variant VOC202012/01, which is shown to be more rapidly transmissible than the SARS-CoV-2 virus, was reported in nearly 40 countries and territories worldwide.

In Vietnam, a Vietnamese woman returning from the UK was found to be infected with the mutated SARS-CoV-2. She arrived together with 305 passengers on Vietnam Airlines flight VN50 that landed in the southern city of Can Tho on December 22, 2020.

The woman was confirmed on January 2 as the first case infected with the new mutant coronavirus in Vietnam. She is in stable health condition after being quarantined at a hospital in the southern province of Tra Vinh.

Currently, Vietnam has only allowed arrivals of foreign diplomats, businesses and highly-skilled workers. 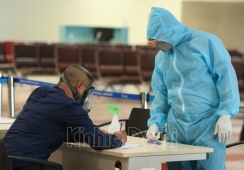