The Hanoitimes - The two countries have made great strides in building a forward-looking and mutually beneficial partnership.

Sentiment among people of both Vietnam and the US is increasingly positive over the past years and likely to be better ahead thanks to improvements in the bilateral diplomatic relations that have lasted for a quarter century.

Vietnam and the US celebrated 25 years of diplomatic relations this year, a testament to improving bilateral diplomatic and economic ties.

The two countries have been commemorating 25 years of diplomatic relations with the US congratulating Vietnam on its ASEAN chairmanship and reaffirming its support for Vietnam including peaceful resolution of disputes, rule of law, freedom of navigation, and unimpeded commerce among others.

Since formalizing diplomatic relations, the US and Vietnam worked for several years negotiating a bilateral trade agreement, which came into force in 2001. They strengthened their relationship with bilateral trade increasing from US$450 million in 1994 to US$81.3 billion in 2019. The US had become Vietnam’s largest export market with Vietnam becoming the US’s quickest growing export market.

The deal helped lift several non-tariff barriers while lowering tariffs on a variety of goods on an average between 3% and 40% including on agricultural, animal products, and electronics. Vietnam was also granted the most favored nation (MFN) status, which was important to become a part of the World Trade Organization (WTO).

Despite the setback when Washington disbanded the Comprehensive Agreement for Trans-Pacific Partnership (CPTPP) in early 2017, bilateral trade between the US and Vietnam has grown and analysts expect the trade relationship between the two countries to continue thriving.

At present, Vietnam's growing population presents a sizeable investment for international businesses, including US ones.

US National Security Advisor Robert C. O’Brien said in his Vietnam visit ended on November 22 that “Not only do such visits reaffirm and strengthen our partnership, they support peace, stability, and the unimpeded flow of commerce in the Indo-Pacific.”

That same year, Vietnam also participated for the first time in the Rim of the Pacific (RIMPAC) – a maritime military exercise hosted biennially by the US.

In 2016, the US lifted a ban on legal arms sales to Vietnam when President Obama visited Hanoi.

Both countries have been forging closer military ties and high-level military exchanges.

For Vietnam, this has been to oppose China’s assertive stance in the region, particularly in the South China Sea. Building upon this relationship, Hanoi was also picked for the US-North Korea summit in February 2019, further cementing Vietnam’s stature on the world stage, Dezan Shira & Associates said.

Alexander Vuving, an expert on Asia security at the US Defense Department Institute, said that “Vietnam holds a key to the regional balance of power”. If this view is shared by the US, it will continue to have a positive and budding relationship with Vietnam, particularly if Vietnam is seen as a counter to China.

While in the past, the US and Vietnam were “opponents on the battlefield”, today, “our security relationship is all about cooperation,” US State Secretary Mike Pompeo said on the occasion of the 25th anniversary of the diplomatic ties.

In the 1980s, the US and Vietnam worked to overcome the devastation of war through the repatriation of the remains of American soldiers in Vietnam. This led to better ties and the formal re-establishment of relations in 1995.

“Since then,” said Secretary Pompeo, “we’ve built a friendship on common interests, mutual respect, and bold resolve to overcome the past and look toward the future.”

The US and Vietnam have also expanded people-to-people ties, including in the field of education. Nearly 30,000 young Vietnamese citizens are currently studying at universities in the US.

“As we celebrate 25 years – a quarter century – of partnership in 2020, let us renew our commitment to a strong and independent Vietnam and a peaceful and prosperous Indo-Pacific region,” Pompeo noted.

Vietnam is an American key partner in the Indo-Pacific region. The two countries have made great strides in building a forward-looking and mutually beneficial partnership.

O’Brien said in his recently-ended visit to Vietnam “As we have overcome the legacies of war, we have created opportunities for our children to grow while strengthening our bonds.” 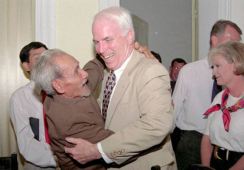 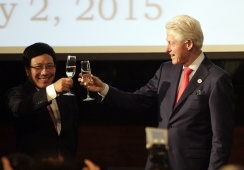 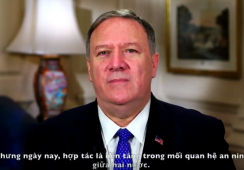