The Hanoitimes - The imbalance hit the peak in 2010 and is popular among well-off groups.

Vietnam is home to a male-bias in the sex ratio at birth (SRB) and the country is warned of the redundancy of men in the population structure for decades to come.

The number of male births for every 100 female newborns in Vietnam showed in the 2019 Population and Housing Census was 111.5 boys over 100 girls, according to the General Statistics Office of Vietnam (GSO).

The GSO attributed the im balance to “son preference” tradition, saying that way of thinking has resulted in the high rate of third child in Vietnam.

According to the United Nations Population Fund (UNFPA), Vietnam’s SRB rate is the third highest in the world, following China and India.

Gender-biased sex selection is one of harmful practices continuing to go on in Vietnam, requiring instant and persistent actions by the whole society and all stakeholders, the UNFPA emphasized. 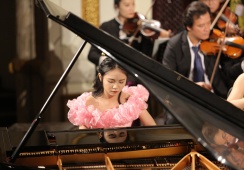 Vietnam's gender imbalance will be serious in 2050