The guidance addresses threats to the world and Washington’s commitments to strengthening alliances.

Vietnam has said that it welcomes initiatives on contributing to the regional peace and development when commenting on the US security strategy.

Spokesperson Le Thi Thu Hang of Vietnam’s Ministry of Foreign Affairs commented at a press conference on March 11 on the US Interim National Security Strategic Guidance that conveys President Biden’s vision for how America will engage with the world.

Such initiatives are in line with international law, meeting the interests of related countries, and the role of ASEAN in the regional and international structure, Hang said.

She noted that there have been more initiatives on the cooperation in the Indo-Pacific proposed by regional and non-regional countries.

On March 3, the White House released the guidance for the Biden administration in the next four years. In which, it stated that the US boldly engages the world to keep Americans safe, prosperous, and free at a time of unprecedented challenges.

In the guidance, the US recognized that many of the biggest threats without borders or walls, and must be met with collective action and stated that “We will work with allies to share responsibilities equitably, while encouraging them to invest in their own comparative advantages against shared current and future threats.”

The White House attached importance to the Indo-Pacific, recognizing that its vital national interests compel the deepest connection to this region.

Beyond its core alliances like Australia, Japan, and South Korea, Washington pledged to deepen partnership with India, New Zealand, Singapore, Vietnam, and other ASEAN member states to advance shared objectives. 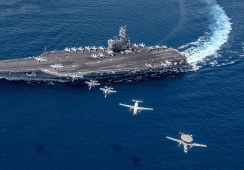