The Hanoitimes - Before the nCoV outbreak, three Vietnamese airlines namely Vietnam Airlines, Jetstar Pacific and VietJet operated 87 regular and charter flight routes to 54 destinations in China with a total of 401 flights per week.

The Civil Aviation Authority of Vietnam (CAAV) has permitted Vietnamese airlines to resume some flight routes from Vietnam to Taiwan, Hong Kong and Macau to ferry stranded passengers at airports in these territories back home.

National flag carrier Vietnam Airlines will re-operate flights between Vietnam and Taiwan as of February 2. Those connecting Hanoi and Ho Chi Minh City to Hong Kong will be operational between February 2 and 5, after which the Hanoi – Hong Kong route is to be suspended again.

Though the route between HCMC and Hong Kong will still be operational after the February 5, it will be closely monitored for potential adjustments in flight frequency in response to travel demand, Vietnam Airlines said in a statement.

The airline will use wide-body Boeing 787-9 instead of Airbus A321 on the HCM City-Taipei route on February 2 to meet high travel demand.

The airline’s low-cost arm Jetstar Pacific will continue operating flights between Hanoi and Hong Kong until February 5, while flights between Vietnam and Taiwan will remain operational.

Meanwhile, budget carrier VietJet Air has announced the suspension of all of its flights to and from mainland China starting February 1 due to the new coronavirus outbreak. It continues to operate all of its other international routes, including services to and from Hong Kong and Taiwan.

The Vietnamese airlines say that they are working closely with authorities and taking precautionary measures as recommended by the Vietnamese government and health authorities to combat the spread of coronavirus for the safety of its passengers, flight crews, aircraft, technical equipment, ground service staff, and the broader community.

The CAAV on February 1 announced it would shut down all the flight routes between Vietnam and China from 1p.m on the same day to prevent the spread of the coronavirus, but allowed some flights to Taiwan and other Chinese territories to bring back home stranded Vietnamese nationals.

All the flights from China will have to land at Van Don airport where passengers will be quarantined and have their health checked before travelling to other locations in Vietnam.

Before the nCoV outbreak, three Vietnamese airlines namely Vietnam Airlines, Jetstar Pacific and VietJet operated 87 regular and charter flight routes to 54 destinations in China with a total of 401 flights per week, according to Zing News.

To curb the nCoV spread, Prime Minister Nguyen Xuan Phuc requested the suspension of visa granting to foreign, including PRC, passport holders who have been in China over the last two weeks, except official passport holders in special cases.

Vietnam has also stopped the passing of holders of temporal visa at border gates with China, and banned the travel through pathways at border areas. 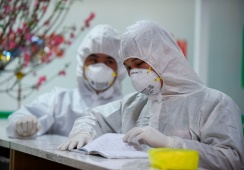