Vietnamese Americans hope better time ahead with the new US government

The Hanoitimes - Vietnamese Americans are relieved that after a tumultuous presidential period, the US is entering a new phase.

In Washington and Southern California, Vietnamese supporters of the US President Joe Biden breathed sigh of relief when he promised to become president for all Americans. No violence cases broke out on this special day throughout the US.

“Anti-American" factors are under control

In Washington DC, a day after the power transition with unprecedented turmoil in the American political history, the calm atmosphere prevails. Mr. Dao from Pennsylvania who witnessed the inauguration of the US president  said: “A historic moment that I will never forget .”

When asked what impressed him the most in this presidential election and inauguration on January 20, he said: "The first woman of color becomes vice president of the US”. And what he most wished for after the new president took office: “No more people die due to Covid-19 because they are required to wear a face mask that the previous president didn’t do.”

Mr. Scott Nguyen from Santa Ana said: “I was nervous during the ceremony. When the 46th president was sworn in, I felt relieved. Obviously, “anti-American" factors like what happened on January 6 have been effectively contained by the authorities.”

Although there are no parades or gatherings of hundred thousand people around the National Mall or a series of celebrations as in other presidential inaugurations,  but hundreds of thousands still exploded with joy hoping for a truly great America to be back.

Many people raised doubts about the new administration could succeed in deal with current challenges. Nearly 25 million Americans have been infected with the Covid-19 pandemic and more than 400,000 others died. With the economy in deep recession, high public debt and unemployment, stigma, division and hatred, many Vietnamese Americans think "it takes time".

“Be mindful that the new president has a four-year challenge. If he fails to fulfill his commitments, voters will oust him  in the next election,” Scott Nguyen said.

Fighting together the pandemic

The reason why this presidential election drew large turnout from Vietnamese Americans in Little Sai Gon, Southern California, was their desire for a better society.

“We need a president who works for the Americans and upholds American values. A president work to overcome the prevailing political polarization,” Ms. Nguyen Mai Khanh, from San Jose said.

According to Seattle-based pharmacist Samantha Lin, the 46th president could set optimistic directions for the US to get out of the gloomy situation caused by Covid-19. The previous administration refused to make masking up in public transport compelling, leaving it on the hand of private companies, despite recommendations from the Center for Disease Control and Prevention on using face masks.

Right after the US president Biden was sworn in, on January 21, he signed an order requiring people to wear face masks on planes, trains, buses and at airports. “This is the positive move of the new government”, said Samantha Lin.

“Americans, no matter they are Democrats or Republicans, should gather around the new administration to combat the pandemic. Let’s make the US  the world's leading superpower in terms of economy instead of the number of dead people from Covid 19,” Ms. Lin said.

The joy and the spirit for a solidarity among the Vietnamese Americans responded to Joe Biden campaign’s theme.

Mr. Hien Le from San Francisco said that Americans should give the new American administration a chance and put their faith and hope into the next four years. "I am relieved that after so much turmoil, America is entering a new era," he said. 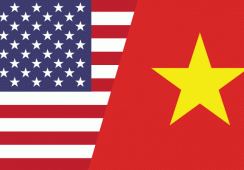