This marks the fourth consecutive year the two Vietnam's national universities have made it into the top 1,000.

The Vietnam National University in Hanoi and its sister institution in Ho Chi Minh City (HCMC) have entered the 801 to 1000 band of the 2022 rankings compiled by Quacquarelli Symonds (QS), a British firm specializing in overseas education, and released on June 9.

This marks the fourth consecutive year the two national universities have made it into the top 1,000. Last year saw both universities in the top 801 to 1,000 band in the global ranking.

This year also witnessed the Hanoi University of Science and Technology integrate the list of the leading 1201+ institutions, while the Ho Chi Minh City-based Ton Duc Thang University was ranked in the range of 1,001 to 1,200.

QS University World Ranking 2022, the eighteenth edition of the annual ranking, is the largest ever as it features 1,300 universities from 93 countries and territories.

The Massachusetts Institute of Technology, more commonly known globally as MIT, topped the 2022 QS University World Rankings, followed by Stanford and Harvard, all of which are US institutions. 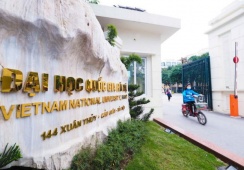