Vietnam climbs seven places to rank 92th out of 185 surveyed countries in terms of cancer rate in 2020, according to the biannual ranking released by the the International Association of Cancer Registries (IACR).

The cancer rate in Vietnam in 2020 was 159.7 per 100,000, placing it 16th in Asia, said the IACR, a professional society dedicated to fostering the aims and activities of cancer registries worldwide.

The nation recorded 122,690 cancer deaths last year, with liver cancer being the leading cause, accounting for 20.6% of the total.

Among Vietnamese men, the five most common cancers were liver, lung, stomach, colorectal and prostate. For women, these were breast, lung, colorectal, stomach and liver cancers.

Worldwide, nearly 19.3 million new cases of cancer were reported in 2020, up 2.3 million over 2018. The number of deaths increased from 9.6 million in 2018 to 9.96 million in 2020, according to the IARC, adding that the cancer rate in developed countries remains higher compared to developing ones.

In relation to Asia, Japan took the lead for the highest cancer rates, followed by South Korea, Singapore, and China.

The top five Southeast Asian nations with the highest cancer rates were Singapore, Brunei, Laos, Thailand, and the Philippines.

The World Health Organization (WHO) has named Vietnam among the countries with the highest increasing rate of cancer fatalities and cancer incidence worldwide.

WHO added that more than a third of cancer deaths can be prevented by avoiding the five leading behavioral and dietary risks - high body mass index, low fruit and vegetable intake, lack of physical activity, smoking, and alcohol consumption. 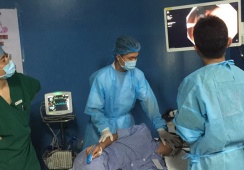 Liver cancer becomes most commonly acquired one in Vietnam

Why the number of cancer patients in Vietnam increases rapidly?