The establishment of e-government is an advancing step in administrative reform and improvements in the business environment.

Vietnam’s efforts towards the establishment of e-government would help contain the spread of Covid-19 outbreak as it reduces direct contact between citizens and government agencies, according to Prime Minister Nguyen Xuan Phuc.

The e-government could not be achieved in the short term, but its construction is divided in phases, while 2020 is a challenging year for Vietnam given the ongoing epidemic, said Phuc in a government meeting discussing the on-year implementation of e-government on February 12.

In 2019, the rate of public online services provided at the most advanced stage available (stage 4) doubled compared to the previous year, according to a government report.

Additionally, new working platforms such as the National E-document Exchange Platform, the e-cabinet and the national public services portal have been put into operation with high efficiency.

Since the launch of the national public services portal on December 9, 2019, a total of 47,377 accounts have been set up with 13.7 millions of visits and over 945,000 applications under processing.

As of present, nine out of 22 ministries, and government agencies, as well as all 63 provinces/cities have integrated their respective public online services in the portal.

Meanwhile, from March 12, 2019 to February 10, 2020, over 1.26 millions of e-documents have been processed through the National E-document Exchange Platform.

Minister - Chairman of the Government Office Mai Tien Dung said that, in addition to higher services quality,  the national public services portal is a major instrument for the government and other agencies to monitor the efficiency and transparency in processing administrative procedures, leading to a decline in corruption and embezzlement during the process.

Moreover, the portal adopted shared systems including the verification, account identification and payment services, which help reduce a substantial amount of public investment in IT in the coming time.

Dung added the establishment of e-government also contributes to administrative reform and improvements in the business environment.

According to Dung, ministries have removed and simplified 3,451 out of 6,191 business conditions; and reduced 6,776 out of 9,926 categories of goods subject to specialized inspection.

Dung said such a move helped save 18 million working days per year, equivalent to over VND6.3 trillion (US$271.24 million) annually. 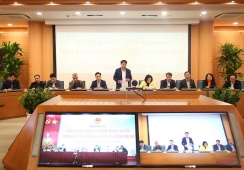 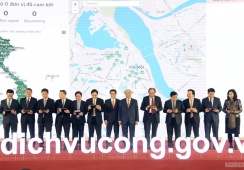