The Hanoitimes - EVFTA takes effect at the right time as Vietnam is recovering from the Covid-19 pandemic and the deal is expected to boost the Vietnam-EU relations.

Vietnam has now a once-in-a-generation chance to capitalize on the EU-Vietnam Free Trade Agreement (EVFTA) and attract more foreign direct investment (FDI) from European enterprises looking for an open, competitive, and business-friendly market, EuroCham President Nicolas Audier said at a dialogue on June 30.

The dialogue, themed “Administrative Reform: A Key Role in EVFTA Implementation”, was held by the European Chamber of Commerce in Vietnam (EuroCham) and the Prime Minister’s Advisory Council for Administrative Procedure Reform (ACAPR) on June 30.

Speaking at the dialogue, Minister-Chairman of the Government Office Mai Tien Dung said that this is the third conference the ACAPR has held with the EU business community in Vietnam.

Speaking at the opening of the dialogue, Audier emphasized that the successful implementation of the EVFTA in 2020 is significant. For it to be signed in June 2019, there had been 14 rounds of consultations with many local agencies and localities, meetings and discussions with EU Parliament members to promote the signing. The next step is to roll out the deal.

In order for EVFTA to come into force, it is necessary to the establishment of the EVFTA’s Business Council to address challenges in the process of the implementation and cooperation, Audier added.

The president of EuroCham commented that Vietnam has become a role model in combating epidemics. “This is the right time to successfully deploy the EVFTA because Vietnam is recovering from the Covid-19 pandemic and the EVFTA will help boost the Vietnam-EU relations,” he noted.

With the EVFTA set to take effect in August, it is essential that businesses and governments work together to ensure its smooth and successful implementation, Audier suggested. One of the most critical factors will be to accelerate Vietnam’s positive progress in administrative reform – streamlining business conditions, strengthening the business environment, and modernizing the legal framework.

Speaking at the dialogue, Minister-Chairman of the Government Office Mai Tien Dung stressed that with a 30-year establishment of diplomatic relations, the implementation of the EVFTA and the EU-Vietnam Investment Protection Agreement (EVIPA) will create stable and long-term frameworks to maximize the potential of cooperation and boost the development of economic – trade – investment relations and make them commensurate with the potential of Vietnam – EU comprehensive cooperation partnership.

Minister Dung also said that the Covid-19 pandemic has been affecting many socio-economic aspects but Vietnam has put the disease under control, and, at the same time, established a new normalcy. This shows the government's determination to achieve the dual goal of combating the pandemic and rebooting the economy.

From the beginning of 2020 until now, the government has reduced 239 business conditions, bringing the total number of business conditions already cut to 3,893 out of a total 6,191. In addition, 6,776 out of 9,926 listed goods subject to specialized inspection and 30 out of 120 administrative procedures related to specialized inspection have been trimmed off.

The total social cost savings from reduction and simplification of administrative procedures is estimated at over 18 million working days per year, equivalent to over VND6.3 trillion (US$270.9 million).

The improvement of administrative procedures and public services through the one-stop-shop mechanism has received positive feedback from businesses and the citizens. In particular, the National Public Service Portal, which has been in operation for the past six months, has integrated and provided 725 online public services, 4.5 times more than in the past three months.

Minister Dung asked enterprises to frankly share their difficulties in doing business and point out specific difficulties and obstacles to the development of industries so that the government and the prime minister could remove those barriers.

At the dialogue, Vietnamese ministers and business leaders discussed a wide range of issues including the EVFTA; access to generic drugs, how to achieve a predictable and consistent legal environment for investment; medical device procurement; goods labeling requirements; food safety inspection registration certificates; and tariffs applied to functional foods, among others. 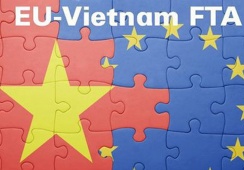