Hanoi is full of particular dishes from the capital of the North, with special cakes being counted among them.

For Hanoi-based food blogger Cong Vu, the Covid-19 pandemic had changed many things among his habit of eating outside.

He was forced to prepare food by himself at home but vividly miss the street foods, which he can’t cook. He also missed the ambiance of food stores in the Old Quarter.

“I’m so happy that all of my favorite food stalls have already resumed their business and the rhythm of life has returned to normal now,” he told The Hanoi Times.

Indeed, there are hundreds of types of food found everywhere in the capital, in tiny eateries or in the bamboo baskets of street vendors.

Traditional Northern Vietnamese cakes or banh are made seasonally, with ingredients such as green bean, sticky rice, sugar, water chestnuts, lotus seeds, and peanuts. Many are wrapped in dried or fresh banana leaves, encasing a sweet inner surprise. Let’s discover some seasonal cakes of Hanoi for the fall-winter that Hanoians rarely cook at home.

The floating dumpling or Banh troi

Rice flour and sugar fillings are the main ingredients. First, the flour is mixed with water. The amount of water is important, otherwise, the dough becomes too glutinous or too dry.The recipe for Banh troi, or “marble cake”/ “floating cake”, sounds quite simple but it is not so easy to make properly. Delicious food can make the eater feel the freshness of well-done dough and smell the charming fragrance of its filling. “Thus, you should order some to try yourself at home, or better, take the chance to hang out with friends at the food stall in Hanoi’s Old Quarter Area,” Vu suggested.

Then, pieces of the cake are rounded with sugar inside and boiled. The fragrance will indicate when they are ready, and when the marble-pattern creations float to the surface, they are picked and placed on plates and sprinkled with some white roasted sesame before being served.

Another variation of Banh troi is Banh chay, which is bigger dumplings and stuffed with a sweet green bean puree. Banh troi tau, meanwhile, is made with dumplings of a similar size to those of Banh chay but are stuffed with black sesame puree, and the syrup is flavored with ginger and must be served warm.

Hanoi’s young people opt for another choice in winter to avoid the evening chill: going to a popular Banh troi tau shop in the center of the Old Quarter in Hanoi, at 30 Hang Giay.

None seem to mind sitting cramped on baby-sized plastic stools on a crowded street corner to enjoy these sweet, steamy treats at reasonable prices of around VND30,000 ($1.3) per portion.

First, the rice is selected, thrashed, sieved, and washed in large washers to eliminate the thin grains that float to the surface. At this stage, it turns yellow from the original green color.

To produce a type of soft com, the rice must be pounded before undergoing the most important stage which is drying in a large iron pan over a wood fire. Pounding and drying techniques are often kept within the household and never passed on to daughters, as once married they are likely to reveal the secrets to their husband's family.

Expert cooks know how long the pounding and drying should take, the frequency of each pounding, how the heat of the fire should be adjusted, and the techniques of choosing good rice and good firewood. The finished product, which must be soft, sweet, and fragrant, then finds its way to customers, covered with lotus leaves to retain its moisture and to give the com the fragrance of the leaf.

There are few things more delicious than a simple dish of green rice in a lotus leaf with bananas. Com is also used to make other popular desserts such as Banh com (green rice custard) and Che com (sticky rice sweet soup).

The fresh newly made com may be pureed and stuffed with green bean paste and fresh coconut to make Banh com; or cooked with cassava flour to make the Che com. It costs VND10,000 (US$0,5) and the best is found in Banh Com Nguyen Ninh or Nguyen Ninh Sticky Rice Custard at No. 1 Hang Than Street. Meanwhile, the Che com can be found at any sweet food stall in Hanoi’s streets for around VND30,000 ($1.3) per portion.

Shrimp cake
Banh tom Ho Tay or West Lake’s shrimp cake is one of the first things Vietnamese tourists coming to Hanoi think of trying. The famed dish is named after West Lake, the largest and most beautiful in the capital and the home to the shrimp that form the basis for Banh tom Ho Tay.
However, there is more to West Lake shrimp cake than just shrimp. The spongy dish is made from thinly-sliced potato or sweet potato, rice flour, and a host of other ingredients. After frying, the dish has the bright yellow of sunlight and a perfect accompaniment to its signature sauce made from garlic, vinegar, sugar, chili, fish sauce, salt, pepper, and small pieces of carrot and green papaya.

“I was very impressed with the shrimp cake the first time I tried the dish. It was tasty but a little bit too crunchy and fatty for westerners,” Huge Noland-an Australian expat in Hanoi told The Hanoi Times.

“A tip for the first-time tryer: dip the pie into the sauce before eating. The sweet-and-sour sauce and fresh salad will help balance the taste,” he stated.

These days, as it becomes more popular, the rice flour in the dish is increasingly replaced by wheat flour and the shrimp are brought in from other sources around Hanoi besides the famous West Lake.

Many restaurants around West Lake, near Phu Tay Ho (West Lake Pagoda), now specializing in Banh tom. The price for a portion is around VND60,000 or $2.6 per person.

The main ingredients of Banh khuc are khuc leaf, which is grown on the banks of the Red River, and sticky rice. The boiled leaves are first pounded into a pulp then mixed with sticky rice flour to make a dark green mixture, before being rolled into portions the size of a child's fist.

Each piece is then be rolled in boiled, ground green peas and meat, half fat and half lean, which has been soaked in pepper. Finally, Banh khuc is layered into a large steamer, with each layer covered with carefully-soaked sticky rice, until the pot is full. The cakes are then steamed on low heat until a delicious aroma permeates the air.

“Having a hot Banh khuc as a late-night snack is one of the great joys of any Hanoian in a cold chili winter,” Cong Vu stated.

His comment may be wrong that a few loves Banh khuc. The cake's lovers believed that the fragrance of sticky rice blended with the scent of khuc leaf, green peas and spiced meat leaves an indelible impression to diners. 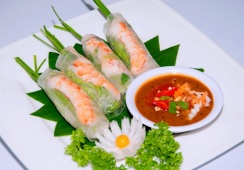 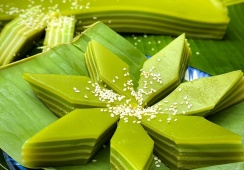 A Vietnamese specialty listed in the world’s best pastry 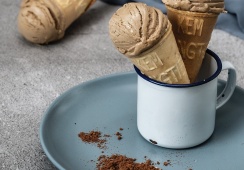