Water supply to some 250,000 families in Hanoi resumed after oil pollution

The Hanoitimes - Water has been replenished to over 147,000 customers in the southwestern part of the capital, including the districts of Thanh Xuan, Nam Tu Liem, Cau Giay and several downtown areas.

Vinaconex Water Supply Joint Stock Company (Viwasupco) on October 16 night resumed providing water for the southwestern region of Hanoi city after an oil contamination scandal, local media reported.
Nguyen Huu Toi, director of Viwaco Joint Stock Company (Viwaco) - one of five distributors of Viwasupco’s water - said that authorities will release an announcement on the water quality soon.
"We have resumed the water supply. Whether the water is safe enough or not, Hanoi's Department of Health and scientists will make an announcement on it," Toi said.


Another Viwasupco distributor, Hadowa, has also restored supply to 150,000 customers in Ha Dong district, parts of Nam Tu Liem district and other localities.
Viwasupco gave no explanation as to whether the water it supplies is safe, said Hadowa director Lai Van Thinh.
The other three distributors are the Ngoc Hai Company, the Dong Tien Thanh Ha Nam Company and the Western Hanoi Development Company (Hadeco).
Water has been replenished to over 147,000 customers in the southwestern part of the capital, including the districts of Thanh Xuan, Nam Tu Liem, Cau Giay and several downtown areas.
Earlier, after initially asserting that its water supply was safe, Viwasupco suddenly cut service to parts of Hanoi on October 15, affecting more than 250,000 families in the capital city. Viwasupco said that it needed to clean its pipes and reservoirs after its water source was contaminated with used oil days earlier.
Around half of the city's downtown residents depend on Viwasupco for their safe water. But for a week now, their daily life has been badly altered by the water pollution.
The Vietnam Environment Administration under the Ministry of Natural Resources and Environment reported a truck with a loading capacity of 2.5 tons was seen dumping used oil into a water collector of Viwasupco waterworks in Ky Son district of Hoa Binh province, a northwestern neighboring locality of Hanoi on October 8.
Tests of the polluted water found high levels of styrene, a substance that is probably carcinogenic. Hanoi authorities have said that people can use the water for purposes like washing clothes and bathing, but should not drink or use it for cooking.
Hanoi city has requested the police to find the truck and the driver that illegally dumped used oil into the environment, but no further information about the perpetrator has been forthcoming.
TAG: Hanoi water pollution 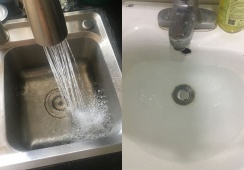