The Hanoitimes - His main aim is to try to divert the attention of American voters away from his until now unsuccessful crisis management to China.

Not immediate but not long after having indicated his intention to review US funding to the World Health Organization (WHO), US President Donald Trump decided to halt any US payments to this UN specialized agency. His move has received condemnation. These condemnations are understandable because the world has been put under pressure by the spreading coronavirus pandemic and the WHO is needed more than ever.

The WHO, created in April 1948, is commissioned to prevent pandemics and to ensure proper health care for people everywhere in the world. Its professional expertise and funds, practical experiences and useful knowledge are paramount in the fight against pandemics and for well-functioning health care systems in the world. Therefore, Trump's halting of US funding to the organization under present circumstances is a fatal blow not only to the WHO but also to people and countries who urgently need its assistance.

His blow is dastardly, too. His attack on the WHO is in connection with his permanent critics of China concerning China's dealing with the pandemic. The WHO is his new scapegoat. His core message is China must bear responsibility and the WHO too. His critics of and attack on the WHO serve him as clear confirmation of China's responsibility for the outbreak and spreading of the pandemic as well as for the damages to life of people and economy of countries in the world caused by the pandemic.

His main aim is to try to divert the attention of American voters away from his until now unsuccessful crisis management to China. He knows that his chance of being re-elected in the coming presidential election depends decisively on the way he is dealing with this pandemic. He tries to pretend that he was very early informed about the danger of the virus at the time when it just broke out in China, to cover up that he truly underestimated the pandemic and that he ignored any warning by some of his advisers. For this purpose of him, China and the WHO are his best scapegoats. 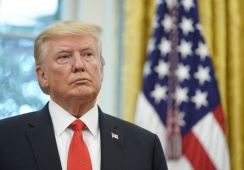