Expected to be completed in 20 months and operational in 2022, the 543-hectare airport in the beach town Phan Thiet will serve both the airforce and civil aviation.

According to the aviation transport development plan until 2020, with a vision to 2030, the joint-use Phan Thiet airport is one of the 15 facilities serving domestic flights in Vietnam.

Authorities of Binh Thuan reported that they have completed site clearance for the 545-ha project. About 400 ha has been handed over to the provincial Military High Command, which is in charge of building the site for the airforce, while the remaining 145 ha given to Hanoi-based Rang Dong Joint-stock Company to build civil aviation area under the form of Build-Operate-Transfer (BOT).

The civil enclave of the airport is designed to have total investment of about VND3.8 trillion (nearly US$165 million). Meanwhile, military enclave will be built with an estimated VND8 trillion (US$347 million).

The airport is scheduled to be operational in 2022.

Speaking at the ground breaking ceremony, Senior Lieutenant-General Tran Don, Deputy Minister of National Defense, urged the Air Defense-Air Force, investor of the military enclave of the airport, to quickly remove any UXOs in the area and continue working with local authorities to speed up site clearance.

Under the government’s approval, the airport will be upgraded from 4C to 4E in the classification of International Civil Aviation Organization, which is able to accommodate wide body jets, Don added.

He stressed that this is a big project of political significance under a master plan approved by the Vietnamese government, which set the target that the country will have 28 airports by 2030.

Vietnam currently has 22 civil airports, including eight in the northern and north-central regions. Tan Son Nhat in HCM City and Noi Bai in Hanoi are the country’s two biggest airports. 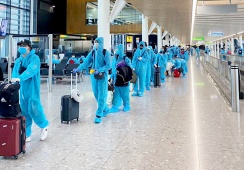