Instead of returning home or traveling during the Tet holiday, people would choose to stay put due to concern of the pandemic.

The new wave of novel coronavirus in Vietnam once again causes severe impacts on Vietnam’s passenger transportation sector, particularly at a peak season ahead of Tet (Lunar New Year) holiday, when people are set to leave big cities and return to their hometowns.

For the first time in many years, train tickets for the upcoming 2021 Tet were not sold out, as the Vietnam Railways (VNR) said 70,000 out of the total 200,000 tickets are still on offer with one week left before the holiday.

According to the VNR, workers at industrial parks in Ho Chi Minh City and the southern province of Binh Duong could not return to their hometown due to the current Covid-19 outbreak, not to mention the lack of international tourists.

This is despite the fact that the VNR has been providing sales promotion programs, including free tickets for children of less than six years old, and 50% of discount of ticket prices for those from six to 10 years old. Meanwhile, students and workers at industrial parks are entitled to a discount of 5-10%.

Experts noted the timing could not be worse for transportation companies as the pandemic outbreak occurred near Tet, forcing people to reschedule their homecoming plan. In some cases, people even returned their train tickets and chose not travel at all.

Facing a similar situation, the aviation market has been quiet despite much lower air fares compared to previous years.

As airlines are planning to increase flights during the Tet holiday, it is expected that the prices of air tickets would be further reduced in the coming days. In a latest move, national flag carrier Vietnam Airlines and budget airline Pacific Airlines and Vietnam Air Services (VASCO) have announced to add 2,100 flights during the  holiday, taking the total number of the passenger capacity the three airlines are preparing to serve in the festive period to 2.4 million.

To ensure safety for passengers during the pandemic, Vietnam Airlines has been providing different methods of check-in services for customers, including check-in online or via smartphone. Vietnam Airlines is also the only airline to date offering in-town check in, which means passengers could go through the process at ticket offices in major cities such as Hanoi or Danang.

“Instead of returning to hometown or traveling, people would choose to stay put due to concern of the pandemic,” said Mr. Thuy, adding this would directly hit revenue of transportation firms. 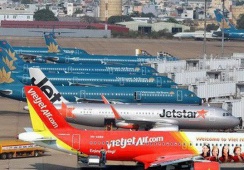 Domestic market to remain priority for Vietnam aviation industry in 2021