The international band of BLANK2Y has been in Vietnam since July 9 to promote South Korean tourism.

Specifically, BLANK2Y will take on the role of “Honorary Ambassador of Korea Tourism in Vietnam” for one year, between July 9, 2022, and July 8, 2023.

During their term, the music band will accompany the Korean Tourism Organization (KTO) in Vietnam in many activities to promote the South Korean travel industry through K-Pop. Specifically, BLANK2Y will perform at “Korean Days in Hanoi” - the largest Korean tourism promotion event to be held in the capital city in November.

According to the chief representative of KTO in Vietnam, Lee Jae Hoon, Vietnam is a country with a higher interest in K-pop as well as Korean culture than any other country in the region. In the future, KTO, together with BLANK2Y, will promote tourism through the Korean wave (Hallyu) and target young people.

“With the strong spread of Hallyu, KTO hopes that our tourism ambassador, the BLANK2Y boy band, will fulfill their duty of promoting Korean tourism among the Vietnamese people, especially Korean music fans in the country,” he stated.

BLANK2Y is a rookie in K-pop, consisting of nine members from China, Japan, and the RoK. Since its debut on May 24, the band has recorded impressive achievements, with nearly 82,000 copies of its first album sold out and its MV “Thumbs Up” surpassing 13 million views on YouTube.

The event introducing the Korean Tourism Ambassador to Vietnam is one among a series of cultural-entertainment events in 2022 to commemorate the 30th founding anniversary of the diplomatic relations between South Korea and Vietnam.

Bilateral tourism between Korea and Vietnam has been growing in recent years. Vietnam is the most popular destination in Southeast Asia among South Korean tourists, with more than 4.3 million arrivals in 2019, an almost fourfold increase from 2015. 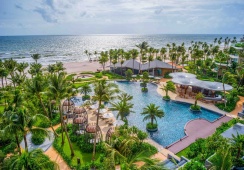