The Hanoitimes - Around 90% of respondents taking part in a survey said they are affected by travel restrictions between Vietnam and Japan.

Up to 65% Japanese firms operating in Vietnam have said they expect their revenues to decrease in the first half of this year and the whole 2020, according to a recent survey conducted by the Japan External Trade Organization (JETRO) and the Japan Chamber of Commerce and Industry (JCCI).

For this year, only 13% looking for a higher business result compared to last year, said JETRO in a survey published on July 28.

Notably, around 90% of the respondents said they are affected by travel restrictions between Vietnam and Japan. Most firms are looking for ease of entry procedures and the soon normalization of flights between the two countries.

Meanwhile, nearly 96% of Japanese firms said they have suffered a hit from Covid-19, while 3% said they are immune from impacts of the pandemic.

According to JETRO, 97% firms operating in manufacturing and production sectors are affected by the Covid-19 pandemic, and the figure in the services sector is 94%.

In terms of scale, 96% large firms and 94% of small and medium firm are impacted.

JETRO earlier this month released a list of 30 Japanese firms that are entitled to receive subsidies from their government to move production facilities out of China, of them 15 eye Vietnam as a next destination. 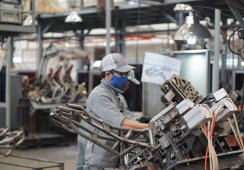