The CNN U.S television channel has recently ranked the Pho bo or beef noodle soup at the second position among 20 best soups of the world.

“Broth is simmered for hours with cinnamon, star anise and other warm spices to create a wonderfully aromatic base for this rice noodle soup,” the CNN’s travel website https://edition.cnn.com wrote.

It also quoited Andrea Nguyen, author of “The Pho Cookbook” that Pho is among Vietnam's most recognized culinary exports. And while today's pho restaurants serve a wide range of flavors, beef is the original. By 1930, Nguyen explained, the soup was served with slices of raw beef cooked gently in the broth.

“Today, beef pho remains the most beloved version in Vietnam, with options that include the original raw beef, a mix of raw and cooked beef, brisket and tendon,” the website wrote.

The special food whose “aroma alone is enough to chase winter from the soul” begins with the steaming of beef shinbones in a huge cauldron until the gelatinous consommé is concentrated - this takes about 24 hours. It is then spiced up with a dedicated balance of herbs, spices and salts.

Hanoian beef noodle Pho bo is an easy soup to fall in love with Thanks to those chewy noodles, that savory broth, the tender slices of beef- all those crunchy, spicy, herby garnishes the cooks get to toss on top.

On a cold evening, after a rough day at work, when you’re sick or on a lazy weekend afternoon, a bowl of piping hot Pho bo is pretty much always a good idea. 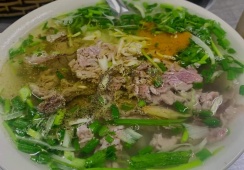