The Hanoitimes - In contrast to Vietnam’s positive outlook, the ADB has trimmed its forecasts for economic growth in developing Asia this year and next year.

With unexpectedly strong growth momentum in the third quarter likely to carry over into the fourth quarter and next year, the Asian Development Bank (ADB) has revised up its forecast for Vietnam's economic growth from 6.8% to 6.9% for 2019, and from 6.7% to 6.8% for 2020.

GDP’s growth in the first three quarter of 2019 in Vietnam accelerated to 7%, the highest rate over the same period in the past nine years. Private consumption rose by 7.3%, and investment expanded by 7.7%, boosted by an improved business environment, continued investor confidence, and increased foreign direct investment.

In contrast to Vietnam’s positive outlook, the ADB has trimmed its forecasts for economic growth in developing Asia this year and next year as growth in China and India is weighed down by both external and domestic factors.

“While growth rates are still solid in developing Asia, persistent trade tensions have taken a toll on the region and are still the biggest risk to the longer-term economic outlook. Domestic investment is also weakening in many countries, as business sentiment has declined,” said ADB Chief Economist Yasuyuki Sawada. “Inflation, on the other hand, is ticking up on the back of higher food prices, as African swine fever has raised pork prices significantly.”

In East Asia, growth in the China is now expected at 6.1% this year and 5.8% next year due to trade tensions and a slowdown in global activity coupled with weaker domestic demand, with family wallets being hit by pork prices that have doubled relative to a year ago. Growth could accelerate, however, should the US and China come to an agreement on trade, the report says. In September, ADB forecast GDP growth of 6.2% in 2019 and 6.0% in 2020.

In South Asia, India’s growth is now seen at a slower 5.1% in fiscal year 2019 as the foundering of a major nonbanking financial company in 2018 led to a rise in risk aversion in the financial sector and a credit crunch. Also, consumption was affected by slow job growth and rural distress aggravated by a poor harvest. Growth should pick up to 6.5% in fiscal year 2020 with supportive policies. In September, ADB forecast India’s GDP to grow 6.5% in 2019 and 7.2% in 2020.

In Southeast Asia, many countries are seeing continued export declines and weaker investment, and growth forecasts have been downgraded for Singapore and Thailand. GDP growth is expected to slow in the Pacific with activity in Fiji, the sub-region’s second largest economy after Papua New Guinea, expected to be more subdued than previously anticipated. 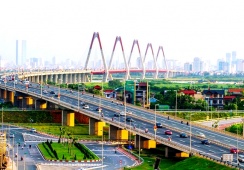