“The dedication with which the cooks make the sauce based on a recipe that is over 400 years old fascinated Azim,” the photo description wrote.

About 20km southwest of Hanoi, the Cu Da village in Thanh Oai district is renowned for its distinctive cultural space with many well-preserved ancient Vietnamese-style houses as well as traditional vermicelli and soy sauce making.

The craft of making soy sauce in Cu Da has been around for a long time. The soya sauce is made from soybean, sticky rice yeast, salt, and rainwater.

Making soy sauce is meticulous and extensive work. Firstly, the soybeans must be roasted until they are brown. They are then ground into small pieces and then soaked in boiled clean rainwater together with the sticky rice yeast in a terra-cotta jar for one week.

After the beans have fermented, the producers add a little salt and more soybeans into the water and stir regularly. The sauce must be fermented on sunny days for three months.

The soy sauce is a popular sauce in northern Vietnam. It is also renowned as the main side dish in Vietnamese vegetarian meals, particularly those are prepared by Buddhist monks. It’s also the most common dipping sauce for rau muong luoc (boiled water spinach) and goi cuon (Spring rolls).

The CEWE Photo Award 2021 received over 606,289 entries from 170 countries. The submissions were made online, and each contestant could send up to 100 images. The competition is open to all photographers - professionals, hobbyists, amateurs, and everyone in between.

Twelve talented photographers were rewarded for their achievements in 10 categories, which were themed around ‘Our World is Beautiful, a call to seek the good in times of increasing global conflicts.

Photographer Azim Khan Ronnie was born in Dhaka and brought up in Bangladesh. He has an utter passion for photography. As a photographer, his essential aim is to capture the moments of life and give them significance by making them static in time.

He had taken part in many International Photography contests and won more than 300 international photography awards and the CEWE Photo Award is one among them. 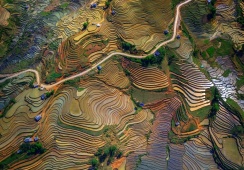