The Hanoitimes - The power plant and an LNG import terminal will play a major role in shaping Vietnam’s energy future by diversifying the energy mix with imported LNG.

Virginia-based AES Corporation (AES) and the Vietnamese Ministry of Industry and Trade (MOIT) on November 8 signed a memorandum of understanding (MOU) on the implementation of a US$1.7 billion LNG-fired power plant in central Vietnam, which is in dire need of energy to accommodate its rapid economic growth.

The signing took place in the presence of Prime Minister Nguyen Xuan Phuc and US Commerce Secretary Wilbur Ross, who led a delegation of 17 US companies to Vietnam on November 7-8.

Under the MOU, AES will build the Son My 2 combined cycle gas turbine (CCGT) power plant, which will have a total capacity of 2.2 gigawatts (GW) and be located in Binh Thuan province. The plant will have a 20-year contract with the Government of Vietnam.

“LNG will be the key for Vietnam’s growing energy demand, by offering a cleaner, more reliable and more affordable energy solution,” said Mark Green, AES Eurasia President. “This MOU is a significant milestone toward the development of the Son My 2 power plant, which we believe will help transform the energy sector in Vietnam.”

Speaking at the MOU signing ceremony, David Stone, CEO of AES Vietnam said the MOU specifies the roles and responsibilities of AES and the MOIT, and overall development timeline of the project, enabling AES to move forward with the project.

In addition to Son My 2, AES will invest a US$1.4 billion LNG import terminal in Son My, which received approval from the Government of Vietnam in August 2019.

Together, the plant and terminal will play a major role in shaping Vietnam’s energy future by diversifying the energy mix with imported LNG, as well as meeting the country’s increasing demand for sustainable and affordable electricity.

“The Son My 2 CCGT and Son My LNG Terminal are excellent examples of the continued partnership between the United States and Vietnam. We strongly believe that the implementation of these two projects will substantially contribute to the bilateral trade and investment relationship between the two countries, while at the same time creating jobs and supporting Vietnam to move toward a cleaner energy future,” said Stone.
TAG: AES LNG Wilbur Ross power plant 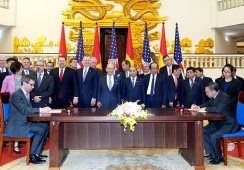