Accelerating the implementation of e-government and digital transformation will lure more investment into Vietnam.

As Vietnam is still seen as an attractive investment destination, the Vietnamese government needs to accelerate and promote e-government, e-commerce, e-banking, fintech, modern cloud computing, and advance paperless operations and cash transactions in all businesses.

Accelerating the implementation of these digital economy objectives will greatly reduce administrative costs and time burdens for businesses, and attract new investors.

In addition, foreign investment limitations, an overly restrictive legal framework governing businesses, and burdensome administrative procedures should be carefully reviewed and selectively relaxed to encourage foreign investment and support economic recovery, according to the AmCham’s statement.

At the conference, the Vietnam Small and Medium Enterprises Association also proposed that the government should promote digital transformation towards digital society, digital government and digital businesses.

Preventive measures against Covid-19 have created new awareness on digital transformation for the whole society. The pandemic could turn challenges into opportunities, especially if local businesses succeed in grasping advantage of information technology (IT), demand for e-commerce will boom and online payments also have the opportunity to flourish, according to participants at the conference.

Minister and Chairman of the Government Office Mai Tien Dung said that in putting emphasis on the improvement of service quality and putting people and enterprises as the center, the government and Prime Minister Nguyen Xuan Phuc have issued many guidelines on building institutions, policies, administrative procedure reform associated with IT applications and e-government.

Minister Dung also added that the application of IT and building e-government have recorded some significant results, helping to renovate the working style within state agencies.

Launched in March 2019, the National e-Document Exchange Platform have connected, seamlessly sent and received electronic documents among 95/95 central agencies and 63 cities and provinces.

So far, nearly 1.7 million documents have been exchanged on the National Public Service Portal. According to a preliminary estimate, the platform helped save over VND1.2 trillion (US$52.17 million) each year.

During the fight against Covid-19, the number of electronic documents increased sharply. In March, e-document exchange increased by five times compared to the first month of its launch. Especially in the months when the country was drastically preventing and controlling Covid-19, about 200,000 e-documents were exchanged among state agencies every month. 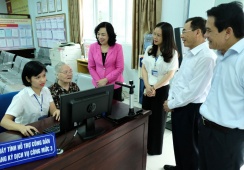 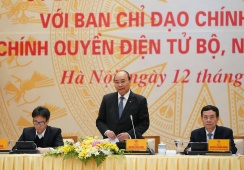