“In Art We Trust” exhibition is aimed at promoting the idea that man can be more active in caring responsibilities in the same manner that women can have a bigger role in the economy.

The art propaganda exhibition entitled “In Art We Trust” promoting gender equality will open to public from January 14 to 16 at Goethe Institut in Hanoi.

According to the organizer of the exhibition, 40 outstanding works of art by authors of various ages (9 to 68 years) from all over the country will be on display.

These paintings were selected from the submissions to the Art Propaganda Contest on Gender Equality, which was co-organized by O Kia Ha Noi Creative Space, Heritage Space and WISE during the past few months.

The exhibition aims to reveal and raise the awareness of gender equality through the language of art. It also targets to re-investigate the propaganda art that has a long history in Vietnamese modern art. The art form has been playing the important role in social life that conveying aesthetics in a condensed graphic-painting language, raising awareness among people about a specific problem.

During the exhibition, the Awards Ceremony will be held on the evening of January 15, 2022 to honor the contest winners. Another hybrid public talk to summarize the contest will also take place on January 16.

“In Art We Trust” propaganda painting contest is a part of the “He Can” media campaign sponsored by Investing In Women, an initiative of the Australian government to promotes women’s economic empowerment in the nations in South East Asia, including Vietnam.

The campaign promotes the idea that man can be more active in caring responsibilities in the same manner that women have a bigger role in the economy. Attendants to Vietnam-China match expected to be 20,000 Hanoi in the eyes of the youth 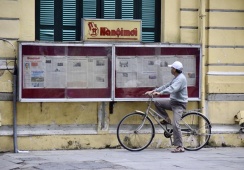