The Hanoitimes - Visitors have the opportunity to experience history at Hoa Lo Prison.

An exhibition entitled “For an ever-blue sky” openned on November 23 at Hoa Lo Prison to celebrate the 48th anniversary of victory of “aerial Dien Bien Phu battle”.

The display showcased a part of the memories of Vietnamese people from the North under the brutal strikes of US navy and air force from 1964 to 1972. American mass bombings pulverized the city, causing severe pains and heavy losses to the people.

Vietnamese’s bravery and wisdom have always shone at the most extreme moments. Despite having to face with the most modern weapons of the US Air Force, Vietnamese troops once again won over the enemy, making the air battle in Hanoi in December 1972 to be another splendid “Dien Bien Phu battle” victory.

The exhibition consists of two thematic areas which are “Airspace protection” and “Connecting the ocean’s coasts.” The first area features documents and artifacts honoring the bravery and wisdom of Vietnamese people in the North during the destructive Vietnam War.

Meanwhile, the second part introduces the efforts of the two sides in healing the wounds of war during the past 45 years. In this process, there are great contributions from veterans, peace-loving organizations and individuals.

Artifacts and documents related to the historical victory were also showcased, including a Ho Chi Minh Badge that was awarded to pilot Nguyen Van Coc for downing an American jet fighter in 1967. He was the pilot who shot down nine warplanes and was awarded the title ‘Hero of the People's Armed Forces’ at the age of 27.

On display there are other artifacts including a handbook of journalist Nguyen Xuan Mai with notes of interviews between foreign journalists and American pilots who were detained at Hoa Lo Prison in 1967; a khaki shirt, a blood pressure monitor and a stethoscope, which were worn and used by doctor Do Doan Dai, former director of Bach Mai Hospital, to examine the hospitalized victims of the US’s  bombing in Hanoi in 1972; the novel "Darkness at noon" by British novelist Arthur Koestler, presented by eight US pilot prisoners as a gift to the Vietnamese wardens on the occasion of their release in 1973. 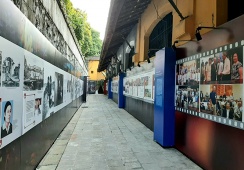