The Hanoitimes - The banking sector is set to have a bright outlook in case the economy return to the uptrend growth.

Despite a difficult economic year caused by the Covid-19 pandemic, Vietnam’s banking sector continued to post positive performance, which lays a solid foundation for banks to gain strong growth in 2021.

Thanks to effective cost-saving measures and the adoption of digital banking, TPBank’s pre-tax profit expanded by 11% year-on-year and stayed above 8% of the year’s plan.

Other banks such as Sacombank, VIB, or LienVietPost Bank have also attained their respective profit targets in 2020. Among those, VIB completed its profit target 2 months in advance with VND4.56 trillion (US$198.5 million) in just 10 months, exceeding the profit of VND4.08 trillion ($177.6 million) in 2019.

CEO of ABBank Le Hai said the bank is on track to exceed all targets set at the shareholder meeting with a pre-tax profit of VND1.37 trillion ($59.6 million) as of November 2020, 1% above the profit target for the year.

With 2020 being the deadline for banks to meet requirements on capital adequacy ratio (CAR) under Basel II standards, a number of banks, including SHB, LienVietPostBank and HD Bank, have all announced their qualification for the requirements in the final days of 2020.

While most banks have seen their profits growing, bad debts remain a major concern. At Vietcombank, the bad debts as of third quarter 2020 surged 36% against the beginning of the year to VND7.88 trillion ($340.5 million).

The BIDV is increasing its provision to settle the debt amount of VND4.6 trillion (US$198.8 million) in the third quarter of 2020, up 84.7% against the previous quarter and 42% year-on-year.

Governor of the State Bank of Vietnam (SBV) Nguyen Thi Hong said the total amount of bad debt from 14 out of 16 commercial banks rose by 30% in the first nine months of 2020. The figure, however, is set for further increase as the economy continues to be under pressure from the Covid-19 crisis.

In 2021, risks of bad debts at banks could become clearer as the Covid-19 pandemic expected to persist for a longer period.

Banking expert Nguyen Tri Hieu predicted the banking sector to have a bright outlook in case the economy subject for a strong rebound.

“Bad debts, however, could be a major risk that banks should be cautious about,” Mr. Hieu noted. 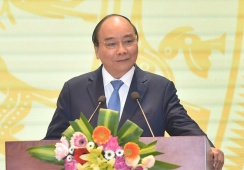