The Hanoitimes - It seems a call from the central bank for credit institutions to forego their profits in 2020 to aid customers and businesses affected by the pandemic have not been effectively implemented.

Since the first outbreak of the Covid-19 pandemic last March, the State Bank of Vietnam (SBV), the country’s central bank, had issued directives instructing the banking sector to provide supporting programs for customers and the business community. These included restructuring of debt payment schedule, freezing or waiving of interest rates for existing debts.

“The restructuring of debt payment is actually the SBV’s permission for banks to refinance their existing debts, instead of moving them into a “bad debt” category,” Mr. Thuong told Hanoitimes, saying this is a risky policy.

Mr. Thuong, however, noted this was a necessary move as for banks, “saving customers mean saving themselves.”

Meanwhile, the SBV instructed four major state-run commercial banks, including Vietinbank, Vietcombank, BIDV and Agribank, to forego 40% of their profits in 2020 to aid customers.

“It may be inappropriate for the central bank to give such instruction, but at the same time, it showed the strong determination of government agencies in keeping the businesses alive,” he added.

Private banks were not subject to such directive, but they had also announced their respective supporting programs in response to the SBV’s instruction.

“The main point is whether a call for banks to forego their profits is effectively met, as part of enterprises and customers were complaining of difficulties in accessing supporting programs,” Mr. Thuong added.

To date, only a few banks have reveiled a specific amount of profit foregone as a result of supporting affected customers, such as Vietcombank with VND3.7 trillion (US$160.7 million), Vietinbank (VND5 trillion or US$217.16 million) and BIDV (VND6.4 trillion or US$278 million).

This means Vietcombank had sacrificed 13.85% of the lender’s total profit to aid customers, while the respective rates of Vietinbank and BIDV were 23.25 and 41.55%, respectively.

“For other banks, they had not had any data to back up their claims of putting customers first before profit,” stated Mr. Thuong.

It is worth mentioning that Vietnam’s positive economic performance in 2020, particularly a GDP growth of 2.91%, was a major boost for banks’ operation in a difficult year.

In the meantime, the SBV also opted for an easing monetary policy by cut its benchmark policy rates four times, in turn creating conditions for banks to lower their capital mobilization rates and subsequently the lending rates.

“A lower interest rates offered at banks, especially for existing debts and long-term loans, however, are not at the same pace with their much lower capital mobilization rate,” stressed Mr. Thuong.

A report from the SBV by late 2020 revealed that credit institutions restructured debt payment schedule for 270,000 customers affected by the pandemic with total outstanding loans worth VND355 trillion (US$15.37 billion).

“Such huge number along with the outstanding loans from previous years would put more pressure for banks in 2021 and subsequent years,” said Mr. Thuong.

While the Covid-19 pandemic is highly likely to continue lingering for most part of 2021, it is necessary for banks to opt for sustainable operation strategy.

At the SBV’s year-end meeting on December 26, 2020, Prime Minister Nguyen Xuan Phuc instructed banks to continue providing support for enterprises and customers hit by the pandemic. 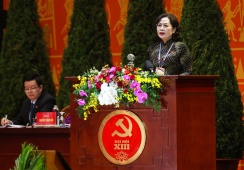