The Hanoitimes - Experts suggest that to increase the attractiveness of the high-tech parks, together with effective special incentives, the high-tech parks should have a dynamic working environment, and modern and synchronous infrastructure.

High-tech parks in Vietnam have remained less attractive to foreign tech firms as they are operating like industrial parks rather than sci-tech hubs while factory rental cost is much higher.

According to experts, high-tech parks now have the advantage in attracting investors as besides complete infrastructure and favorable transportation, they have also received many preferential policies from the government to attract investors in high-tech projects.

However, according to the Management Board of Hoa Lac High-tech Park (HHTP) in Hanoi, the park lured no foreign-invested project and only four domestically-invested projects last year. Currently, the park is filled at 30% of its 1,500 hectares, while foreign direct investment (FDI) accounts for 30% of total investment.

The figures show wavering attraction of HHTP, which was founded in 1998 and boasts the longest history among the country’s three high-tech parks. HHTP has more lucrative advantages than the other parks thanks to Decree 74, which includes unique incentives such as the 10% corporate income tax (CIT) within the first 30 years for a new investment project of at least VND4 trillion (US$174 million).

In particular, SHTP saw just one big foreign-invested project last year – the US$650 million from Hong Kong’s Techtronic Industries, licensed towards the end of the year. Although that project helped SHTP beat the whole-year FDI attraction target and contributed 8% to the city’s total, FDI at the park itself was modest.

Meanwhile, DHTP lured in US$178 million in total in 2019, thus increasing the total accumulative registered capital to US$337 million in FDI. The projects in operation are the aerospace manufacturing factory of the US-based Universal Alloy Corporation, Tokyo Keiki Precision Technology, Japan’s NIWA Foundry, ESTEC, and ICT VINA medical device factory from South Korea.

A major problem at high-tech parks in Vietnam is high factory rental cost. Because facilities in high-tech parks often have more scale and methodical investment, the prices are also correspondingly higher than industrial parks. Normally, the monthly rental price in large industrial zones in Vietnam usually ranges from US$2- 4 per square meter. In hi-tech parks, the rate will be around US$5-6 per square meter or higher. Therefore, price factors are one of the difficulties for investors.

Experts suggested that to increase the attractiveness of the high-tech parks, together with effective special incentives, the high-tech parks should have a dynamic working environment, as well as modern and synchronous infrastructure.

Besides, the HHTP Management Board partly blamed legal barriers, especially regulations on refund of site clearance cost that investors use pocket money in advance, for the poor attraction of the parks.

In an effort to improve FDI attraction, HHTP is working with relevant governmental agencies on the amendments to laws on investment, enterprises, land, and personal income tax, along with relevant decrees. The park also plans to co-operate with the Ministry of Finance in revising Decree No.35/2017/ND-CP issued in 2017 on collection of land leasing fee in economic zones and high-tech parks to facilitate refund of site clearance cost.
This year, HHTP will intensify co-operation with international organizations such as Japan International Cooperation Agency, Japan External Trade Organization, Korea Trade-Investment Promotion Agency, and others to promote investment opportunities at home and abroad. 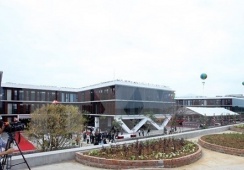