The Hanoitimes - Car sales number in Vietnam in the first seven months of this year dropped 28% year-on-year to 131,248 units across all segments.

The number of cars sold in Vietnam slightly increased by 0.3% month-on-month to 24,065 units in July but decreased 13% year-on-year, according to monthly data from the Vietnam Automobile Manufacturers Association (VAMA).

The figure, however, marked the positive growth in car sales number for three consecutive months following growth of 103% month-on-month in May and 26.4% in June.

Sales of domestically assembled cars reached 83,604 units during the period, down 22% compared to the same period of last year, while imported completely-built-units (CBUs) totaled 47,644 units, down 36%.

Automobile is considered a key industry in Vietnam, accounting for approximately 3% of the national GDP. However, this industry was severely impacted by the Covid-19 pandemic, with Viet Dragon Securities Company predicting a decline of 15% in sales volume this year compared to its prevision earlier this year. 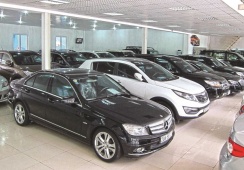