This resulted in trillions of dong being pumped into the economy and helped reduce the inter-banking lending rates.

In the first three weeks in November, the State Bank of Vietnam (SBV), the country’s central bank, bought in a total of VND60 trillion ($2.63 billion) in foreign currencies.

This resulted in trillions of dong were pumped into the economy, helping reduce the inter-banking lending rates by 0.04 percentage points to 0.65% per annum at the end of last week, and at 0.75% in overnight rate (down 0.03 percentage points) for the one-week loan, stated the SSI Securities Corporation (SSI) in a report.

An update from the SBV revealed the capital mobilization rate has significantly reduced since April as the public continues to withdraw money from the baking system amid a low-interest-rate environment.

It is estimated that the deposits from individual customers in the banking sector would expand by 4% in 2021, significantly down from the 7.5% growth rate recorded in 2020.

According to the SSI, the number of deposits would hardly see any significant changes during the last two months of this year.

“The low GDP growth in 2021 may impact the financial situation of the people, which would translate into a modest growth in people’s deposits in banks compared to the pre-Covid-19 period,” noted the SSI.

Meanwhile, the SBV has repeatedly reaffirmed its stance to maintain an easing monetary policy, for which the SSI expected the central bank would soon expand credit quota for banks with good financial situations.

The SSI also noted the exchange rate in the inter-banking market has been stabilized at around VND22,645/USD, while the rate in the free market was VND22,525/22,755 per USD.

“Despite the trade balance falling into a deficit of $370 million in the first half of November, such trend is expected to be overturned in the last half of the month with a trade surplus taking over for the remainder of the year,” stated the SSI.

The SSI also pointed out a strong remittance inflow during the year-end period and a balance of supply-demand of foreign currency during this period as key factors to maintaining a stable USD/VND exchange in late 2021 and early 2022.

VND to remain on a gradual weakening trend in long-term

“Strong inflows from trade surpluses and foreign direct investments (FDI) will continue to drive dong strength, but more importantly, the central bank appears to be favoring a stronger dong, in order to curb imported inflation and also likely caused by protracted pressure from the United States although the US Treasury removed Vietnam from its currency manipulator list,” it noted.

In long term, Fitch Solutions expected the VND to remain on a gradual weakening trend against the US dollar, which would stand at VND23,200/USD, slightly weaker relative to 2021.

“Higher structural inflation in Vietnam versus the US will also weigh on export competitiveness and incentivize imports, which combined will pressure the dong weaker,” stated Fitch Solutions.

“We forecast inflation in Vietnam to average 3.6% between 2022 and 2023. Our forecasts for Vietnam lie above our 1.8% average forecast for the US over the same period,” it continued.

Despite these slightly bearish drivers, Vietnam’s strong economic growth prospects, in which Fitch Solutions forecast real GDP growth of 6.6% in 2022 and 6.5% in 2023, exceeding the 3.7% and 1.9% the agency expects for the US.

This suggests that continued strong investment flows to Vietnam will limit the scope for dong weakness, it concluded. 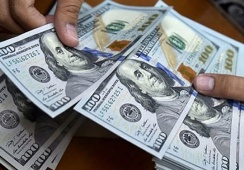