Customs clearance of Vietnam’s exports of agricultural products to China, including dragon fruit, via official channels is carried out as usual.

The decision of Guangxi Zhuang Autonomous Region in China, and possible of Yunnan province, to extend the closure of border markets and suspend informal cross-border trade until the end of February would not affect Vietnam’s agricultural exports to China via formal border gates, according to the Ministry of Industry and Trade (MoIT).

The MoIT said a similar move from Yunnan’s authority is just a matter of time, given the complicated situation of the new coronavirus (nCoV) outbreak in China.

Customs clearance of Vietnam’s exports of agricultural products to China, including dragon fruit, via official channels is carried out as usual, albeit at a slower clearance process due to strict nCoV countermeasures.

Therefore, China's decision to extend closure of cross-border markets and unofficial trade activities would have major impacts on exports of these products from Vietnam, said the MoIT.

The MoIT and the Ministry of Agricultural and Rural Development (MARD) have anticipated such a decision by the Chinese side while local enterprises have gradually reduced the amount of dragon fruit and watermelon exported via unofficial trade.

As of February 9, there were 173 trucks carrying dragon fruit in Lang Son province and 152 in Lao Cai province that are waiting for clearance, slightly unchanged from the end of January.

The MoIT requested the Consulate General of Vietnam in Guangxi and Yunnan to work with the local authorities to minimize impacts from the closure of border markets and unofficial trade.

In the meantime, the MoIT expected local producers to negotiate with their Chinese partners to use official channels for trading, which would require different methods of packaging, labels and compliance with rules of origin. As such, the ministry would be willing to issue certificate of origins (C/O) for goods subject to export.

The MoIT urges logistics firms with frozen warehouses to continue reducing costs of storage and transportation for agricultural companies exporting products to China.

Additionally, the MoIT would continue to cooperate with the MARD in looking for new export markets in replacement of the Chinese one at the moment.

Minister of Agriculture and Rural Development Nguyen Xuan Cuong previously said the agricultural sector would suffer the most from the outbreak as exports to China are poised to plunge.

As of present, Vietnam’s exports of agricultural products account for 22 – 24% of the country’s farm exports. 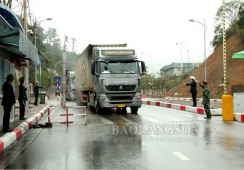