The Hanoitimes - Deputy Prime Minister Vuong Dinh Hue requested FWD to invest in innovation startups in Vietnam, which are considered one of the country’s potential fields for development.

Hue requested FWD to invest in innovation startups in Vietnam, which are considered one of the country’s potential fields for development, said the Deputy PM in a meeting with Richard Li, president of Pacific Century.

On November 12, Vietcombank signed a contract with FWD to become the latter’s official distributor of life insurance services in Vietnam. As part of the deal, FWD agreed to purchase life insurance joint venture of Vietcombank-Cardif.

Li said Vietcombank is one of the top commercial banks in Vietnam with strong financial capabilities and high growth rate, which are the main reasons for FWD to choose Vietcombank as its investment partner.

Established in 2013, FWD made its first presence in Vietnam in June 2016 through the acquisition of life insurance company Great Eastern Vietnam, which has been issued business license in life and health insurances by the Ministry of Finance.

With regard to life insurance, there are many domestic and foreign insurers offering diversified products in Vietnam, Hue informed.

According to Hue, the first layer is the state’s subsidy for elderly people without insurance coverage. The second layer is voluntary and compulsory social insurance, in which some certain groups are supported financially to purchase insurance products. The third layer is voluntary pension insurance under the market-based mechanism.

Hue added the Ministry of Finance is tasked with reviewing CPIC’s proposal in compliance with the law. 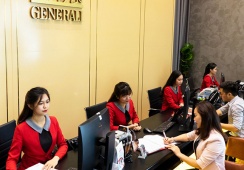