Cooperative considered most effective way to boost income for millions of farmers: PM

International practices show cooperatives and cooperative union of farming households are the most effective way to improve living conditions for millions of farmers.

“The development of a collective economy should only come from the needs of the people and  in line with the objectivity rule,” Mr. Phuc noted.

The Vietnam PM said that in many countries around the world, a collective economy with cooperatives at its core is a common economic model that brings benefits to the society.

Since the first cooperative emerged in Europe nearly two centuries ago, there are currently 3 million operational cooperatives with 1.2 billion members worldwide, which help create 250 million jobs and generate US$2.2 trillion in revenue.

In advanced countries, cooperative continues to make up an essential part in the economy. For example, the US has nearly 50,000 cooperatives with 150 million members and generate US$100 billion in revenue; in Canada, over 70% of the population are members of cooperatives; Japan has 65 million cooperative members with revenue of over US$145 billion; in New Zealand, cooperatives make up 20% of total GDP and account for 95% of supply for dairy products.

Mr. Phuc, however, acknowledged the collective economy in Vietnam has not realized its full potential as its contribution to the economy remains low compared to other economic sectors.

“In the coming time, Vietnam is committed to fulfilling its obligation under various free trade agreement that the country is  part of, including requirements for food safety and quality,” stated Mr. Phuc.

Growing competition in both domestic and international markets would put farming households under serious disadvantages, as such, cooperatives and collective economy should be the solution to ensure their sustainable income, he suggested.

PM Phuc outlined five priorities to ensure further growth of collective economy in Vietnam, of which enhancing efficiency in operation of the VCA  as the representative of 8.1 million members and over 30 million farmers is the first and foremost task.

The VCA is tasked with reviewing current regulations and propose new measures to support the development of the local collective economy, the PM said.

He also urged government agencies and provinces/cities should identify the development of collective economy and cooperatives as an inevitable trend and one of the main objectives of the entire political system, saying this is the second priority task.

The PM encourages cooperatives to apply modern governance model, technologies and science, at the same time enhancing their competitiveness and resilience against a volatile market.

“A new-style cooperative in a new era is an advanced economic model that creates benefit and put their members at its core,” Mr. Phuc stressed.

As the fourth priority task, Mr. Phuc stressed Vietnam should continue to promote key products at national-, regional- and provincial levels, while pushing for stronger linkages among farmers, logistics and distribution networks.

Lastly, he urged cooperatives to be active in international cooperation and take advantages from international resources and expertise for strong growth of the collective economy. 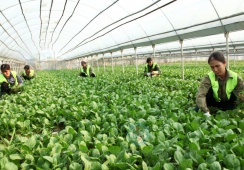