The Hanoitimes - So far, Danang has undergone 25 days of community transmission and the city-linked local infections have exceeded 500.

The coronavirus outbreak in Danang is being held down after SARS-CoV-2 resurfaced in the beach city on July 25, Acting Minister of Health Nguyen Thanh Long has announced.

Measures applied to cope with the outbreaks in Danang and the neighboring province of Quang Nam have proved effective, resulting in a decrease in new infections over the past days, Mr. Long said Tuesday.

Shortly after the detection of the community transmission in Danang, several hospitals in the city have been closed off in an attempt to contain the disease. Almost the entire city was put under lockdown, no flights to and from Danang were allowed from July 28.

In a quickest move, a task force of leading health professionals led by a deputy health minister was sent to this beach city to make best and prompt decisions in testing and treatment.

Elite doctors and nurses from Hanoi and Ho Chi Minh City have been deployed there to support the treatment of Covid-19 patients, mostly those in critical conditions.

Days onward, health troops from Haiphong, Phu Tho, Thua Thien-Hue, and Binh Dinh were heading toward Danang to share burden with the city’s health sector as a large number of local health workers were quarantined after the virus remerged in hospitals.

In the very first days of the outbreak, Danang enhanced the testing capacity with around 10,000 units per day. Two field hospitals were quickly built to support the treatment of Covid-19 patients with mild symptoms.

Vietnam’s leading private conglomerate Vingroup has donated lots of medical equipment and hundreds of ventilators it produced for the makeshift hospitals. Other businesses also joined hands.

At present, Danang remains the largest hot spot with 359 cases (out of 989 nationwide) and 22 deaths. 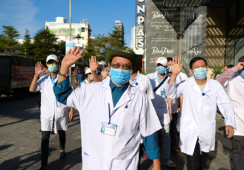 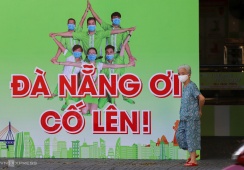 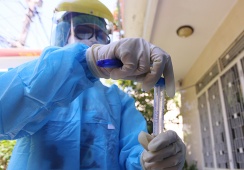