The Hanoitimes - The CPI increased 5.56% year-on-year in the first quarter, the highest growth rate for a January-March quarter during the 2016 – 2020 period.

Vietnam's consumer price index (CPI), the main gauge of inflation, in March saw a sharp decline to five-year low of 0.72% against the previous month, but increased 0.34% versus the end of 2019 and 4.87% year-on-year, according to the General Statistics Office (GSO).

Impacts of the Covid-19 pandemic, a plunge in oil prices and abundant poultry supplies led to the decline in the CPI in March, stated the GSO.

Seven out of 11 commodity groups, which are components of the basket for CPI calculation, witnessed month-on-month declines in prices. Among them, transportation posted the sharpest decrease of 4.87%, mainly due to petroleum price cuts on February 29 and March 15, shaving 0.43 percentage points off the overall CPI.

Other groups that saw their prices down in March were culture, entertainment, and tourism (-1.4%) as people limited outdoor activities on Covid-19; food and catering services (-0.43%); housing, water and electricity supply, and construction materials (-0.25%); garment, footwear and hats (-0.15%); beverages and cigarettes (-0.11%); and post and telecommunications (-0.06%).

According to the GSO, core inflation in March went down 0.06% month-on-month, resulting in an increase of 2.95% year-on-year and a rise of 3.05% in the first quarter compared to the same period of 2019. 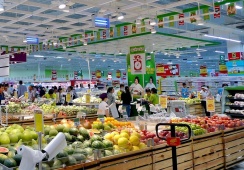 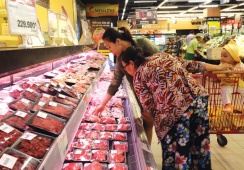