Further support is needed from policymakers to provide both legal and infrastructure means to boost e-payment in Vietnam.

Given significant Covid-19 impacts on socio-economic life, the pandemic is putting huge pressure on Vietnamese enterprises to take on and speed up the digital transformation process, according to Chairman of the Vietnam Chamber of Commerce and Industry (VCCI) Vu Tien Loc.

While the Covid-19 pandemic continues to persist with uncertainties, enterprises have no other choice than to speed up the changes and seek a more sustainable business model during the context of the pandemic, stated Mr. Loc at a forum discussing measure to boost non-cash payment among enterprises held recently in Hanoi.

In late 2016, Prime Minister Nguyen Xuan Phuc approved a project aimed at promoting non-cash payment in Vietnam during the 2016 – 2020 period. Four years on, there have been improvements in non-cash payment activities in Vietnam, including significant upgrade in payment technologies and greater stability in the inter-banking e-payment system to meet growing demand of customers.

The majority of e-payment methods are growing strongly in Vietnam, especially mobile banking with a growth rate of 200% in recent months. Statistics revealed the country is home to 70 credit institutions, not to mention intermediary payment services providers.

The value of transaction via inter-banking e-payment services in the first three months of 2020 expanded by 21% year-on-year.

Despite such improvements, Vietnam still records a high ratio of people using cash in transaction. Data from International Data Group (IDG) revealed that in 2019, nearly 40% of the Vietnamese population had bank accounts, but over 80% still used cash for their daily transaction.

From enterprises’ perspective, while non-cash transaction has become an inevitable trend, e-payment has not received the attention it deserves, stated Mr. Loc.

According to Mr. Loc, the infrastructure system for e-payment in Vietnam remains inefficient, while financial institutions, including banks and intermediary payment services providers, have their own payment systems and points of sales, causing confusion among customers and waste of resources.

Moreover, new payment methods such as QR code or biometrics payment have emerged but are not fully assessed by local authorities for wider application.

Another major issue that Mr. Loc pointed out is the imperfect legal framework for digital payment, in turn limiting the expansion of such methods among the business community.

Mr. Loc urged further support is needed from policymakers to provide both legal and infrastructure means to boost e-payment in Vietnam in general, and that of among the business community, in particular. 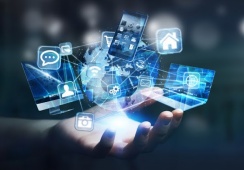 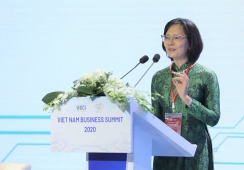 Vietnam businesses urged to rethink towards sustainable and digital future