The Hanoitimes - A low-cost labor force, stable political environment and one of the world’s fastest growing economies have been appealing features making Vietnam an attractive investment destination.

Mounting environmental pressure has led many Chinese and foreign multinationals to relocate their factories to Southeast Asia. More importantly, many are looking to offset the business risks from the intensification of the trade war between the US and China.

Additionally, a low-cost labor force, stable political environment and one of the world’s fastest growing economies have also been appealing features making Vietnam an attractive investment destination, stated the VDSC in a report.

To date, Vietnam’s estimated labor costs are equal to 52% and 64% of that of China and three ASEAN competitors’ average - Thailand, Indonesia and Malaysia.

In the first seven months of this year, while foreign direct investment (FDI) commitments declined by 6.9% year-on-year to US$18.82 billion, manufacturing and processing continued to attract substantial attention with investment capital of over US$8.96 billion, or 47.6% of the registered tally.

A major part of these inflows have been channeled to industrial parks and economic zones in Hanoi and Bac Ninh in the North and Ho Chi Minh, Dong Nai and Binh Duong in the South, informed VDSC.

Therefore, it should be a prosperous year for industrial park developers, especially those owning large and available land banks, stressed VDSC.

Meanwhile, the shortage of available land has become an issue in the South due to high current occupancy rates while supply has been limited. Although Covid-19 may be causing temporary difficulties, there is still a strong demand for industrial space. The average price for industrial land in Southern Vietnam is at US$106 per square meter per lease term, up 9.7% year-on-year, according to a JLL report.

Buoyed by strong fundamentals, Vietnam has attracted interest from investors, who are actively looking into joint ventures with local industrial developers or to acquire land bank and operating assets, added VDSC.

Investment and Industrial Development (BCM) and Phuoc Hoa Rubber (PHR) in the South own enormous areas of industrial land, more than 1,000 ha each, in Binh Duong. Major tenants are timber enterprises, including domestic and FDI ones. Various tenants operate in logistics, electricity, mechanism, timber and consumer goods.

Sonadezi Chau Duc (SZC) also owns a large land bank available for lease in Ba Ria - Vung Tau province, with leasing revenue in the third quarter up 30% year-on-year, thanks to its core business.

Additionally, the country has 17 coastal economic zones covering a combined area of approximately 845,000 hectares of land and water surface. 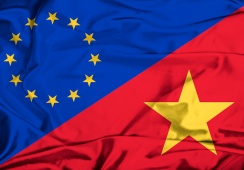 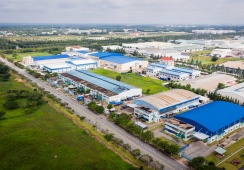 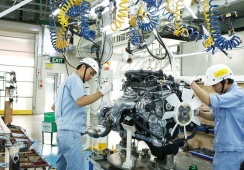