If the world's GDP growth decreases by one percentage point, Vietnam's export expansion would fall by four percentage points, but the decline in 2020 seems to be even more serious.

Economic reforms and international cooperation are essential for Vietnam to navigate through the Covid-19 pandemic, according to Nguyen Anh Duong, head of the Macroeconomic Policy Department under the Central Institute for Economic Management (CIEM).

Mr. Duong referred to CIEM’s assessment last year that if the world's GDP growth decreases by one percentage point, Vietnam's export expansion would decrease by four percentage points. The decline in 2020 “seems to be even more serious,” he added.

This came in the face of a substantial disruption in many crucial industries of the economy, stated Mr. Duong at conference held on November 10.

“The industries expected to benefit the most from the new-generation free trade agreements, such as the CPTPP and EVFTA, are also disrupted by the pandemic,” noted Mr. Duong, citing export growth contractions of 9.3% for textile and 9.1% for footwear in the first ten months this year.

While public investment is identified as a key measure to boost economic recovery, the disbursement of public funds in the January–October period remained slow at 68.3% of the plan.

During this context, Mr. Duong expected Vietnam to continue pushing for economic reforms, focusing on cost reduction associated with policy reforms and creating room and motivation for business innovation.

Moreover, priority should be given to effective integration into new FTAs, including strengthening capacity to meet higher standards and requirements, he added.

Mr. Duong also pointed to the need for training human resources and helping the manpower better adapt to future jobs in the post-Covid-19 period.

Le Duy Binh, director of Economica Vietnam, stated one of Vietnam’s biggest advantage compared to other countries is having put the Covid-19 pandemic under control, as well as having a stable macro-economic environment.

“Vietnam is considered one of the most reliable countries as multinationals look at to restructure their global value chains,” stated Mr. Binh.

In the coming time, Vietnam should take advantage of current FTAs and search for new market opportunities, Mr. Binh suggested.

According to Mr. Binh, a new driving force for economic growth could be digital economy, which is currently estimated at US$12 billion, representing a growth rate of 40% year-on-year in 2020.

Sharing Mr. Binh’s view, economist Vo Tri Thanh said Covid-19 could accelerate the development of digital technologies, as such, it is essential for Vietnamese enterprises to incorporate new technologies into operations.

Economist Tran Tho Dat from the National Economics University said as higher productivity would lead to sustainable development in the post-Covid-19 pandemic, digital economy is the way forward to enhance productivity.

Mr. Dat referred to data from Enterprises Survey of 2012 – 2017 saying that an increase of 1% in the ratio of internet users in enterprises would result in an increase of 0.003% in productivity.

Given the lack of a legal framework for digital economy, Mr. Dat said it is essential for Vietnam to have a strategic framework that would serve as fundamental for directions and legal regulations on digital transformation.

Moreover, the government should continue providing support for startups, innovation, improvements of technology, while enhancing the preparedness towards digital technology era.

As a long-term process, Mr. Dat suggested Vietnam should gradually apply digitalization in a number of economic sectors, including manufacturing, ICT and science technology, finance, banking, and insurance, among others. 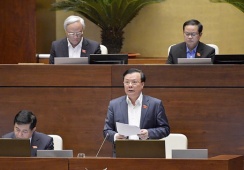